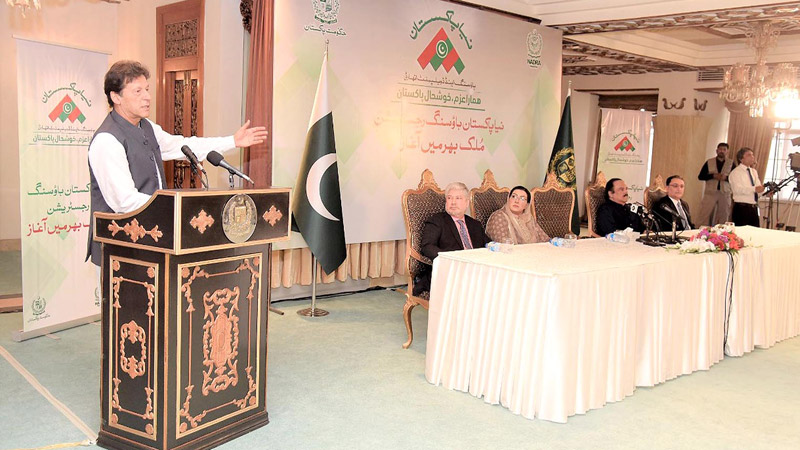 Prime Minister Imran Khan Monday launched the second phase of registration for the Naya Pakistan Housing Programme to provide affordable housing facilities to the low-income segments of the society.

The objective of countrywide registration process by the Pakistan Housing and Development Authority is to collect data of the public demand for housing across the country and launch projects in accordance with the needs.

The prime minister also launched a web portal (www.nphp.nadra.gov.pk) by pushing the button from where the applicants would be able to register themselves while being at home without having to visit any office.

Addressing the launching ceremony, the prime minister said the federal cabinet will approve necessary legislation on Tuesday (today) to enable the commercial banks extend loan facility to the poor people, who cannot afford to buy a house.

He said the registration process will enable the relevant authorities to ascertain the public demand and launch housing projects in the areas where those are required. The prime minister asked the people to register themselves in the process so that the government can know the housing demand and that how much an applicant can pay to ascertain the volume of the funding.

He also expressed the confidence that such schemes will be launched across the country, including Quetta, Gwadar, Lahore and Islamabad to overcome the housing shortage being faced by the people. The prime minister said the housing authority will introduce one-window operations to facilitate the applicants. He said the housing project will help uplift 40 other allied industries, besides providing ample opportunities to those who want to invest in those schemes.

He said the government desires the students and young entrepreneurs to form their own firms for taking part in the housing project which will beget jobs. He said the construction of five million houses is not an easy task but the government has taken up the challenge to overcome the deficit. Pakistan, he said, has been lagging behind in the housing sector owing to the absence of mortgage facility for the low-income class. The house mortgage ratio in India stands at 10 percent and in the Western world 80 to 90 percent, but in Pakistan it is far below at just 0.2 percent.

The prime minister said currently, the persons having enough cash, can buy a house and they are in very small percentage. He said the housing shortage has swelled to 10 million in the country and for low-earners and salaried persons, it is very difficult to buy a house on cash. He said it is pleasing that the people are taking huge interest in the housing project. Imran Khan said the government has also collected data on its land bank that will be offered to the investors for construction of the housing units.

While chairing another meeting to review progress on development projects in the merged tribal districts, Prime Minister Imran Khan said the people of the merged tribal areas have rendered huge sacrifices for the country and faced difficulties, therefore the government has prioritized uplift of these areas with provision of job opportunities to the youth.

The meeting took stock of the uplift projects and the process on the administrative matters after the merger of these former tribal areas. The prime minister observed that registration of all businesses and broadening of the tax net are indispensable for the economic prosperity of the country. However, he said in the merged areas, the imposition of tax rate should be made after considering the ground realities and the issues faced by the people.

The prime minister said about half of the country’s income is being spent on the payment of loans and interest. It is imperative to document the economic activities and increase the tax net for the economic stability, he added.