Fogel, Ford and price of wheat

To keep the price of wheat at PKR 1,300 per 40 kilograms, the government inevitably has to implement measures that lower the imports of wheat and protect its producers from international prices, such as through imposing import tariffs (the import tariff on wheat is currently at 60 percent)

Robert W. Fogel, the 1993 Nobel Prize Laureate for Economics, pointed out in one of his seminal analysis of economic history that hungry and undernourished workers do not produce as much as well fed and healthy workers. Based on this finding, it would make sense from an employer’s perspective to pay wages high enough so that the workers have enough resources to buy food and other necessities to keep themselves in good health.

In fact, in the past employers like Ford have provided their workers’ wages higher than was necessary, given market conditions. Henry Ford, in 1914, caused quite a stir when he decided to offer his workers five dollars a day — double the going market pay at the time. Other companies have been known to provide good housing, medical services, schools and even scholarships for higher education for the brightest children of their employees.

For countries, the same principles and practices hold. A food-secure, well-nourished, well-housed and educated labour force can enable countries to spur and sustain economic growth and foster shared prosperity.

However, not all employers are like Ford and not everyone gets to enjoy wages twice that of the going wage rate. Around the world, and especially in developing countries, a large part of the population is underpaid and forced to do without crucial needs of food security, clean water, nutrition, health and education.

Let’s go back to Fogel whose concerns cantered around food and nutrition, and bring the discussion closer to home. In Pakistan, the rates of food insecurity and malnutrition are extremely high — a fact which most people are cognizant of and are hardly surprised to hear. To achieve food security and nutrition, food ought to be accessible and available at an affordable price for people to be able to sustain their food security. 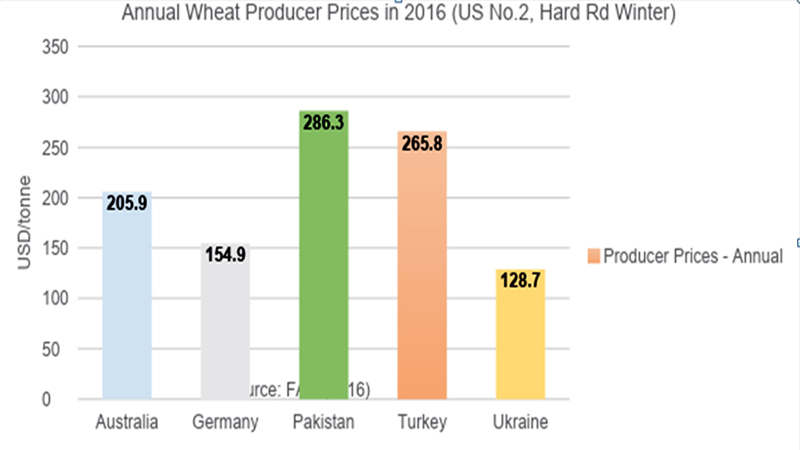 In Pakistan, prices of staple food in Pakistan are high. Take wheat, for example, the world price of wheat currently hovers around US$ 234 per tonne (as of 01 November 2018). The average retail price of wheat in big centres, Lahore and Karachi, is between US$ 260 — 284 per tonne (around PKR 695 — 758 per 20 kg), according to data gathered by the Food and Agriculture Organization of the United Nations (FAO) up to October 2018.

The high food prices are not necessarily distressing for everyone; while consumers are hurt by the rise in prices, for farmers and producers they are encouraging. Pakistan currently pays its wheat-producing farmers PKR 1,300 per 40 kilograms. This was equivalent to almost US$ 300/tonne in March-April this year (when the US Dollar to Pakistan Rupee exchange rate was close to 110 PKR).

This is an astronomical sum. Farmers in major wheat producing countries would be satisfied if they get a fraction of what Pakistani producers receive (as can be seen from the table).

The impact of high wheat prices on consumers (both in rural and urban areas) and the poor can be enormous. We know that that in developing countries the poor spend a large share of their income on food. Pakistan is no different: among the people in the lowest quintile, share of food expenditure in total consumption expenditure is close to 50 percent.

In fact, the impact of high wheat prices on poor households can be highly stressful given the fact that per capita wheat consumption in Pakistan is around 124 kilograms per head — one of the highest in the world.

It is commonly believed that most poor farmers and rural households benefit from high food prices. This is not necessarily true — the bulk of our rural population comprises of small scale farmers and landless people, most of whom are net buyers of food. High wheat prices, therefore, not only imply distress for urban consumers but also for those living in rural areas. Why are prices for wheat so high in Pakistan compared to other countries around the world? Well, part of it has to do with government incentives that promote the production, procurement and sale of wheat.

To keep the price of wheat at PKR 1,300 per 40 kilograms, the government inevitably has to implement measures that lower the imports of wheat and protect its producers from international prices, such as through imposing import tariffs (the import tariff on wheat is currently at 60 percent). It has to then buy, store and then dispose of this wheat, involving significant budgetary outlays. If there is surplus, the government has to go on and provide subsidies to exporters. For the 2018/19 season, the wheat production is estimated to be 26.3 million metric tonnes (MMT) and exports are projected to reach 1.0 MMT.

If the import restrictions on wheat are removed, domestic prices could fall considerably. At present, Pakistan’s domestic wheat prices in big centers, Lahore and Karachi, are 11 percent to 21 percent higher compared to international prices.

For a poor family of say six people in Karachi, consuming about 744 kilograms of wheat per year this would amount to savings in the household food budgets of around PKR 5,000 per year. Not to mention that the government would save an enormous sum of budgetary resources itself. According to government’s own numbers, the subsidy on wheat costs the national exchequer around 200 billion PKR.

The new government has set itself an impressive reforms agenda and, has in its rhetoric, expressed great concern for the poor and small scale farmers. Reforming the wheat sector could be an appropriate way to do this. It can bring down the price of wheat down for both urban and poor rural consumers and free-up extra budgetary resources at its disposal to spend on its social and human development policies.

The dilemma of incentivizing farmers and producers versus supporting consumers is not unique to Pakistan. Reform thinking in agriculture should not happen in isolation; experiences of other countries could undoubtedly support wise policymaking.

Management from the Imperial College of Science and Technology

Ahmed Raza Gorsi works in international development specializing in food, agriculture and nutrition. Views expressed here are his own. Twitter: @ahmedraza_gorsi Daud Khan has more than 30 years of experience on global food security and rural development issues. He has degrees in economics from the LSE and Oxford — where he was a Rhodes Scholar; and a degree in Environmental Management from the Imperial College of Science and Technology