Jimmy Engineer attended a function in Toronto titled 'Artists for World Peace' which was organised by the Universal Peace Federation and the Women's Federation for World Peace, at which he along with two other people was conferred with a certificate as The Ambassador for Peace 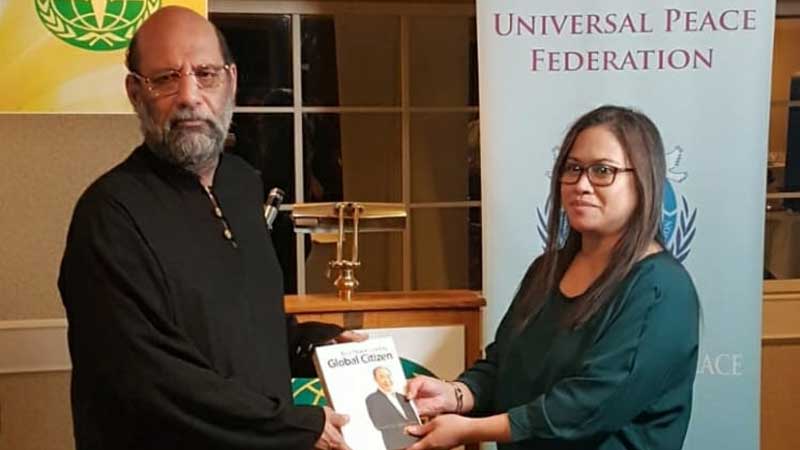 Besides official delegations which visit foreign countries from time to time to promote bilateral relations, cooperation and trade, prominent figures from different fields can and are doing quite appreciable work to promote and highlight the positive, soft, moderate and forward looking image of Pakistan and its peace loving people before the world. This is what world renowned Pakistani artist, social crusader, peace activist and philanthropist Jimmy Engineer has been doing quite actively, sincerely and successfully for some time.

Jimmy Engineer, who regards himself as unofficial goodwill ambassador of Pakistan, recently completed his month long goodwill visit to Canada. During the visit, Jimmy Engineer participated in a number of well-attended functions and events in Mississauga (Ontario), Toronto and Ottawa.

During his frequent goodwill tours to foreign countries, his work was selected and showcased at The Mall, Erin Mills Town Centre in Mississauga Ontario.

On the opening day of the week long painting exhibition, Jimmy Engineer talked about life; illustrating his thoughts and motivation behind his paintings. He also answered questions from the audience which included a large number of people from the Pakistani community as well as local artists, art lovers and diplomats.

He told the appreciative and responsive audience that the sole purpose behind different countries frequently displaying his creative art work is to tell the world at large that Pakistan has great people and great artists. He said displaying his art in foreign countries indeed carries a message, as a lot of people do not know much about Pakistan and this is the best way to highlight the positive side of Pakistan.

Jimmy Engineer said he wears four hats, as a social worker, an artist, a human rights worker and a peace activist.

By and large, the visiting world renowned artist, social crusader and philanthropist Jimmy Engineer, has dedicated his life to social causes; his paintings were highly appreciated not only in Pakistan but also all over the world. Through his arthe spreads the message of peace and harmony and promotes a soft and a positive image of Pakistan and its people, each of his paintings duly highlights the different aspects of the lives of the people, their struggle and achievements.

Over the last four decades, Jimmy Engineer has created more than 3000 paintings, 1000 calligraphies and 1500 drawings which are in museums and private collections in more than 60 countries including Italy, France, Denmark, Switzerland, Russia, India, China, Yugoslavia, Japan, Australia, Canada, Britain, Korea, Sri Lanka, Germany, Singapore, Sweden, Belgium, Abu Dhabi , Dubai (UAE), Austria, Spain, Thailand, Philippines, Malaysia, Indonesia, Hong Kong, Kenya, Turkey, USA and of course Pakistan. Many of his paintings have remained undocumented as he has been giving countless of these away to charities to raise money for good causes.

As a social crusader, to his credit he continues to spread awareness about food programmes intellectually and developmentally disabled by entertaining them in posh hotels and restaurants and other places of entertainment in Karachi, Lahore and also in Sri Lanka. To raise awareness he has taken almost 100 solo walks for myriad of issues, mainly relating to disadvantaged children, widows and orphans as well as to the hardships and the endemic health problems they continue to endure.

Jimmy Engineer was duly covered and appreciated by the Canadian press and TV as well.

The Canada-Pakistan Business Council has also acquired two wonderful works of art of Jimmy Engineer which are part of his ‘Peace Series’ for the collection of the Royal Ontario Museum. The paintings have been selected by Museum Curator Deepali Dewan.

Jimmy Engineer embodies national integration. He was born to a Parsi family in Loralai, Balochistan, had his education in Lahore and is settled in Karachi, since he became a professional and is perhaps the most well travelled Pakistani artist with international art exhibitions in a number of countries around the globe.

The writer is Lahore-based Freelance Journalist, Columnist and Retired Deputy Controller (News) Radio Pakistan, Islamabad and can be reached at zahidriffat@gmail.com