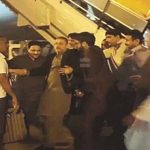 The arrest of Sharjeel Inam Memon, former provincial information minister Sindh by NAB after his pre-arrest bail was rejected by Sindh High Court in a highly dramatic fashion. The dejected Sharjeel kept sitting in the court for several hours after his bail was rejected to avoid being apprehended. However the NAB team with the assistance […]

Terror outfits often take refuge behind so-called other-worldly conceived ideologies offering tantalising promises to their adherents in order to coalesce them into a formidable movement to challenge a governmental system or any ideology they detest. Endeavours they make to show the entities they oppose in poor display. These outfits also develop transnational wherewithal to entrench […]

The changed regional policy of United States of America as evident from President Donald Trump’s 21st August speech accusing Pakistan of ‘harbouring agents of chaos’ challenging permanent peace in Afghanistan is certainly disturbing for Pakistan. America has choreographed its South Asia policy, offering greater role to India in the region in order to scuttle China’s […]