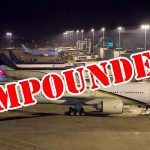 A PIA Boeing 777 registration APBMH operating flight islamabad Kuala Lumpur Islamabad is impounded by the malaysian authorities in Kuala Lumpur by orders of the court which was approached by the lessor of the aircraft.The leasing company has not been paid the lease amount hence they approached the courts there.PIA managment has not paid the […] 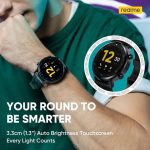 Accessories define the quality of fashion in the fast track style fiesta that impacts everyone. Wearing something untrendy is out of the question as the changing times demand shrewd sense of fashion. Among all the available fashion options, the most stylish smart wearable of the year was realme Watch S. The realme Watch S is […] 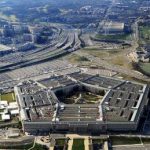 The Trump administration has carried out sweeping changes atop the Defense Department’s civilian leadership structure, removing several of its most senior officials and replacing them with perceived loyalists to the President. The flurry of changes, announced by the Department of Defense in a statement roughly 24 hours after President Donald Trump fired Defense Secretary Mark […] 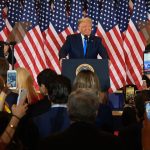 President Trump attacked legitimate vote counting efforts in remarks from the White House early Wednesday, suggesting attempts to tally all ballots amounted to disenfranchising his supporters. “Millions and millions of people voted for us,” Trump said in the East Room. “A very sad group of people is trying to disenfranchise that group of people.” His […] 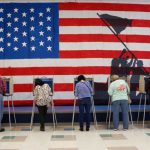 Joe Biden flipped an electoral vote in Nebraska and expressed confidence to supporters that he would prevail in three Northern states and Arizona. In the Senate races, Democrats faced an uphill battle to claim a majority. President Trump won a series of key battlegrounds early on Wednesday morning, including Florida, Ohio and Iowa, as Joseph […] 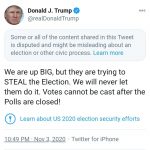 Twitter placed a “disputed” label on a tweet sent just minutes ago by President Trump in which he baselessly claimed, “We are up BIG, but they are trying to STEAL the Election.” “Some or all of the content shared in this Tweet is disputed and might be misleading about how to participate in an election […] 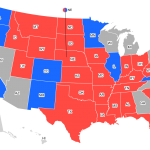