* 'Thank you for being with me through all my mistakes, my ups and downs, my heartaches, for growing with me, for raising babies with me who are my proudest gifts,' she wrote 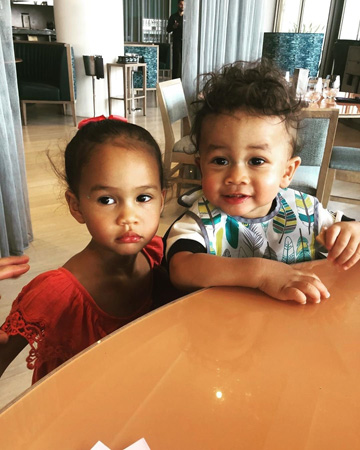 Keep those babies comin’. On Sept. 15, Chrissy Teigen took to social media to wish John Legend, father of their daughter Luna, 6, and Miles, 4, a happy anniversary, calling her husband to her “absolute best friend and lover and partner in life” and hinting that she doesn’t want their baby on the way to be their last.

“Thank you for being with me through all my mistakes, my ups and downs, my heartaches, for growing with me, for raising babies with me who are my proudest gifts,” she wrote on Instagram. “We have created the most wonderful life together and all I want to do for the rest of my life is watch you make the world better, feed people, bring people joy, make more babies and kiss on your old and grey face one day.”

Along with the emotional message, Chrissy, 36-who announced she was pregnant in August-posted clips from the singer’s new music Wonder Woman featuring heart-warming family moments.

The day before, John, 43, also shared the music video on his Instagram and gave a sweet shoutout to his wife, writing, “I married my Wonder Woman 9 years ago today. Happy Anniversary, my love. You never cease to amaze me.”

In 2020, the couple were expecting a third child, a boy. However, Chrissy was not able to carry him to term. She recently opened up about her heart-breaking pregnancy loss, explaining that she had a life-saving abortion.

“Two years ago, when I was pregnant with Jack, John and my third child, I had to make a lot of difficult and heart-breaking decisions,” Chrissy explained during Propper Daley’s “A Day of Unreasonable Conversation” summit on Sept. 15. “It became very clear around halfway through that he would not survive and that I wouldn’t either without any medical intervention.”

She added, “Let’s just call it what it was: It was an abortion. An abortion to save my life for a baby that had absolutely no chance.”

The Lip Sync Battle co-host had originally announced that she suffered a miscarriage and said that it wasn’t until after the Supreme Court overturned Roe v. Wade, which protected someone’s right to have an abortion, in June, that she realised the true nature of her medical condition.