Signs of normalcy as water level going down in Manchhar Lake 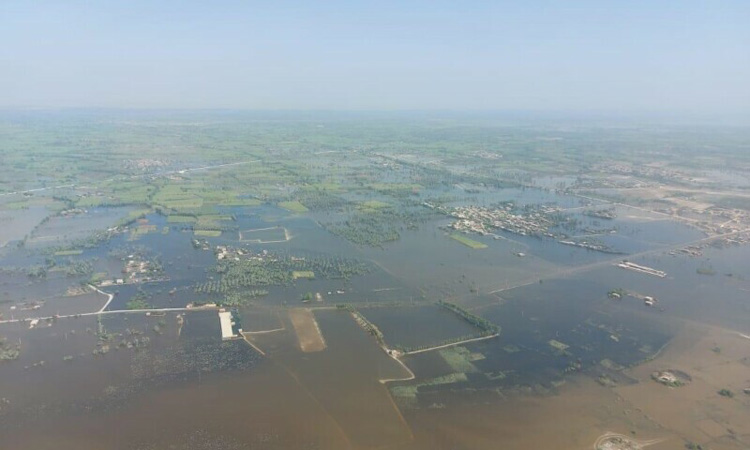 The floodwater in Manchhar Lake further subsided on Monday as the water continued to flow into the River Indus without any disruption.

Sindh Irrigation Minister Jam Khan Shoro confirmed the report, saying the situation on the right bank of the river was expected to be normal as soon as the water level goes down in the lake. He said the flow of water in to the Indus River was fast.

Some internally displaced persons (IDPs) were also reported to have begun moving back to their villages. “A few families have left for their homes,” a volunteer at a girls’ college in Qasimabad, Hyderabad said. “Others feel they can go back very soon, but I don’t know how and when,” he added.

Irrigation engineer Mahesh Kumar said water level in Manchhar had subsided to 120.7 feet but it needed to go down to 12 to 14 feet, which he said is it’s normal level. It is pertinent to mention that the lake’s full capacity stands at 122.8 feet.

Kumar said the water was now flowing directly into the Indus River through the Larkana-Sehwan (LS) bund. He added that the water intensity at ring bunds at Mehar, Johi and Bhan Syedabad were back to normal levels while the emergency declared previously there in view of raging water had now been lifted.

Separately, Dr Karim Mirani, who works for Dadu Civil Hospital, said that two children died in the last 24 hours due to various diseases, adding that the inflow of patients at the hospital was on the rise.

Floods from record monsoon rains and glacial melt in the mountainous north have affected 33 million people and killed 1,545 since June 14, washing away homes, roads, railways, livestock and crops, in damage estimated at $30 billion. Both the government and UN Secretary-General Antonio Guterres have blamed climate change for the extreme weather that led to the flooding, which submerged nearly a third of the country.

Sindh has been particularly hit hard, with Manchhar Lake witnessing a surge in its water level in recent days as floodwaters from the north and hill torrents from Balochistan flow southwards, leaving behind a trail of deaths and destruction.

Hundreds of thousands of people have been made homeless by flooding in Sindh, with many sleeping by the side of elevated highways to protect themselves from the water.

Three 132kV grid stations in Khairpur Nathan Shah, Faridabad, and Bhan Syedabad are still closed as up to eight feet of water is still standing in and around the power stations. According to Sukkur Electric Power Company (Sepco) Chief Executive Officer Saeed Dawich, the transmission lines had collapsed near Johi city as a result of extreme flooding, which caused a prolonged power outage in many parts of Dadu district.