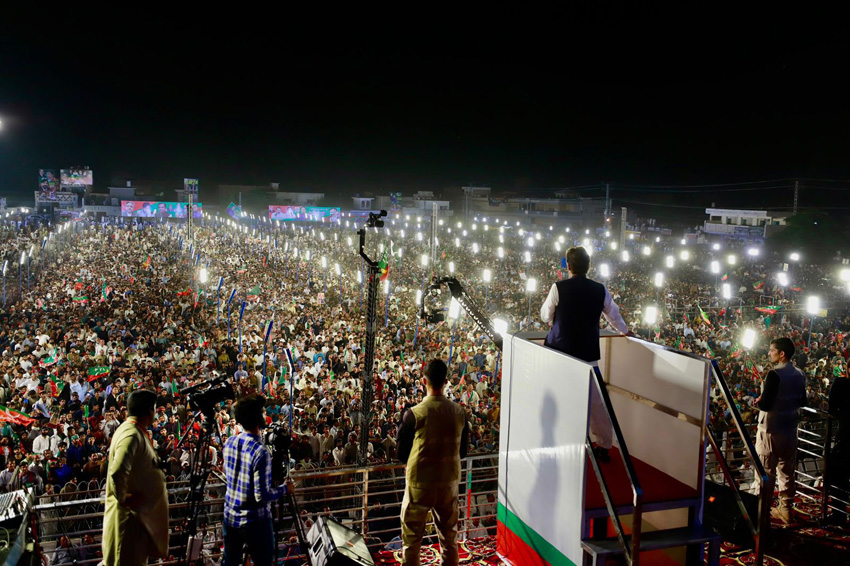 Former prime minister and Pakistan Tehreek-e-Insaaf (PTI) chief Imran khan asked the party leaders and supporters to threaten back those threatening them from ‘unknown numbers’, a private TV channel reported.

“Women, children, and especially young men must prepare themselves, and be ready do break the chains of fear,” Imran Khan said while addressing a rally in Chakwal on Monday. Giving an example of the people of Kofa, he said that they had the fear of Yazid and did not come out.

Imran said he was not doing politics rather he was fighting for ‘real freedom’ and doing ‘jihad’. “Break the idol of fear… do not fear those who give threats through secret numbers. If they threaten you, then you should threaten them back. “If any Mr X and Mr Y are intimidating you, then you should respond to their threats. Do whatever you can we will respond to you as well,” he added.

Imran Khan said that the nation will not forget those ‘traitors’ who imposed this ‘imported government’ upon them, accusing the incumbent rulers of destroying the country’s economy. “I will not accept these thieves and will continue to compete with them and their backers till I am alive,” he said.

Imran said all sectors of the economy were flourishing during his tenure when the then opposition along with the “conspirators” toppled his government which he said triggered economic crisis in the country. “They run a propaganda campaign against my government with the help of their paid media houses that the country’s economy was sinking during my tenure,” he said.

Imran Khan said that when he says that the army chief should be selected on merit, It means Pakistan People’s Party and Pakistan Muslim League-Nawaz should not get to select the next COAS as they are the most corrupt people and do not rely on merit.

He said if PPP believed in merit, Itizaz Ahsan would have been the head of PPP instead of Zardari and Bilawal. Similarly, Mariyam Nawaz would not be taking all the big decisions of the PML-N. He said that these two parties do not believe in merit. So if you want a prosperous Pakistan, the country that Quaid-e-Azam and Allama Iqbal had dreamed of, you must come out when I give the call, said Imran Khan. Imran while comparing himself with the PPP and PML-N leaders said unlike former premier Nawaz Sharif he was not “nurtured” in establishment’s nursery and came to power after 22 years of political struggle. “No country can prosper without meritocracy.

You have no future when our 60% cabinet members are out on bail and our leaders are Nawaz Sharif and Asif Zardari,” he added. “Army chief should be appointed on merit and I believe only those nations prosper which follow merit.” “DG ISPR, you should have got me right about [army chief appointment comments],” said Imran while referring to his controversial remarks that angered the military.

Imran Khan mocked Prime Minister Shehbaz Sharif, saying that he felt intimidated in the presence of Russian President Vladimir Putin. He took a jibe at the premier claiming that “his legs were trembling [kanpain taang rahi theen] in the presence of Putin during their bilateral meeting on the sidelines of the recently held Shanghai Cooperation Organisation (SCO) summit in Uzbekistan.

He reiterated his agenda of calling on the public against the incumbent regime and said: “They [leaders of the coalition government] thought I would stay silent. They should have known that I have stood on my feet to reach this position.” Khan criticised PM Shehbaz for his recent foreign trips following flood devastations in the country and said: “Look at Shehbaz’s insensitivity. He is visiting [countries] abroad during such conditions. What battle is he going to win aboard while the country has been flooded?”

Khan also pointed his guns at Foreign Minister Bilawal Bhutto-Zardari denouncing him for leaving the country during a time of crisis. “Bilawal also went abroad. They have been imposed [on us] because he will listen to their orders,” Khan said. Reiterating his previous position on bringing the allegedly looted money back into the country, Khan said: “If they bring back even half the [looted] money back, then Pakistan would not have to ask for funds.”

Regarding former prime minister Nawaz Sharif, Khan recalled that Shehbaz had signed an affidavit that his brother will return; “however, he didn’t come back.” Khan, criticising PML-N Vice President Maryam Nawaz, said: “Maryam holds a PhD in lying, she is acting like a princess and hasn’t even worked for an hour throughout her life, therefore, she knows nothing about merit.”