TORONTO: In an unprecedented show of power, more than 110,000 Canadian Sikhs took part in voting for the Khalistan Referendum in Brampton, Ontario, to demand an independent state of Khalistan with Shimla as its capital.

Organised by the pro-Khalistani advocacy group Sikhs For Justice (SFJ), the voting started with a special prayer led by the religious leader Bhai Daljit Singh Sekhon – a close associate of Bhai Harjinder Singh Parha in whose name the voting centre was dedicated. Thousands were returned unable to vote at the close of the day at 5PM while queues stretched to several kilometers at the end of the day.

By noon, the queue had stretched to around five kilometres from the Gore Meadow Community Centre Brampton to the nearest highway. There was so much traffic pressure coming towards the voting centre that the Ontario police blocked the highway for all kinds of traffic, for three hours, to prevent more Sikhs from attempting to reach the venue in their cars.

By the afternoon, there was a sea of people around the centre carrying flags of Khalistan, chanting slogans demanding the creation of Khalistan, calling on India to end human rights violations of Sikhs and asking the international community to listen to the demands of millions of Sikhs in Indian Punjab and around the world. The observers confirmed that thousands had been returned at the close of the voting while queues still stretched to over two kilometres. 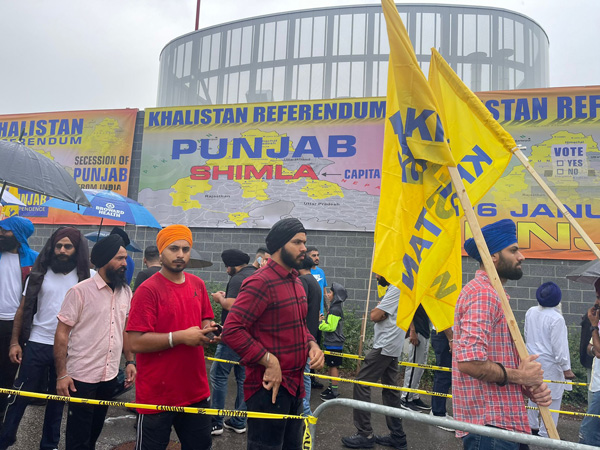 Organisers at the Sikhs for Justice as well local observers estimated the total number of participants to be comfortably over 110,000. Deann Allison, Canada’s Member of Parliament for Niagra West for the Conservative party, said in a tweet at mid-day: “Amazing turnout at Gore Meadows community center in Brampton where the Sikh Nation is voting for their right to self-determination. Over 50,000 votes and lines are still growing.”

The SFJ said attendance in Ontario for Khalistan voting had broken all previous records of voting in London, where over 30000 Sikhs had taken part; Italy, where the number was just below London; Geneva where the presence was under 10000 and UK’s cities of Slough, Birmingham, Leicester and Manchester where the numbers were significant.

The SFJ welcomed the turnout in huge numbers. Its Counsel General Gurpatwant Singh Pannun said the Sikhs have shown in Canada that they will not accept anything less than an independent Khalistan with Shimla as capital of the free Punjab. “Today, Canadians voted in the independence referendum to reclaim Shimla as the capital once Punjab is liberated from the Indian occupation. The voting in Punjab for the Khalistan Referendum will start from January 26, 2023, coinciding with India’s 74th Republic Day.” 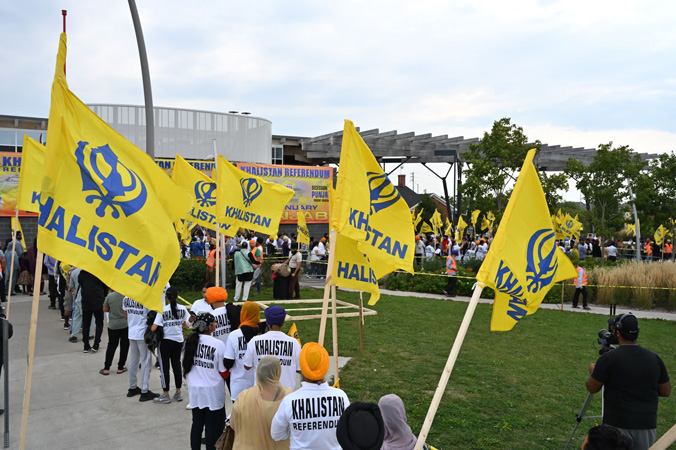 There were more than 300 Sikh volunteers manning the community centre reserved for voting. Most of those volunteering were Canadian born Sikh youth who have shown strong connection with the Khalistan movement, initiated by their parents who were most born and raised in India.

Canada is now home to around a million Sikhs who strongly associate themselves with the Khalistani movement – an issue that has troubled the Indian govt for many years and has caused diplomatic rifts between India and Canada.

Earlier, the Canadian government refused to stop the SFJ from oragniing the unofficial balloting for the Khalistan Referendum.

Canada’s position on the Khalistan Referendum is backed by its own laws as well as the United Nations laws that all people have a right to self-determination and freedom of speech and expression in a peaceful manner.

Participants of the referendum, on the occasion, said that the Indian Punjab will soon emerge as an Independent country on the map of the world. They said that India cannot deprive Sikh people from their right to independence at gunpoint.

The Khalistan Referendum voting campaign is being organised under the supervision of the independent Punjab Referendum Commission (PRC) which will announce the results when all phases are completed.