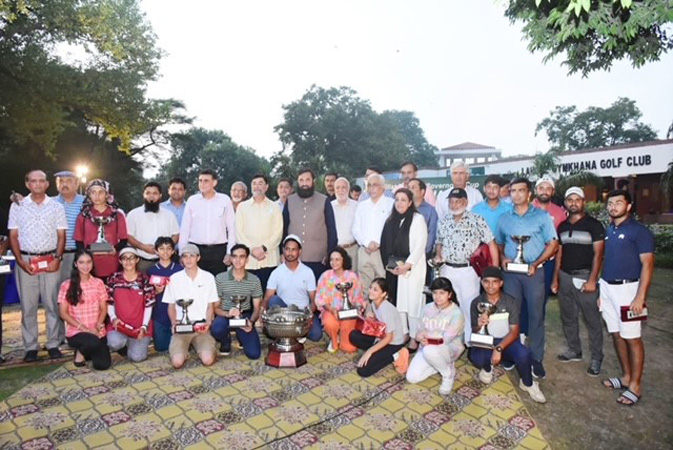 LAHORE: Ghulam Haider won the 39th Governor’s Cup Golf Championship which concluded at Lahore Gymkhana Club Golf Course after three rounds of fierce competition here on Sunday. The championship brought distinction and acclamation for the artistic golf player of the host club who made the grade by curbing the victory intents of many capable aspirants and emerging as the incomparable one. At the start of the final day, at least ten skillful contenders were all intent on upstaging the prominent leaders like Saad Habib, Farid Maneka and Hamza Kardar. And as the flow of final round progressed, noticeable was the inability of the second round overnight leaders to hold on to their exalted positions on the leaderboard and plummeted unfavorably as they hit shots that lacked a classy touch. The vacuum thus created was adequately filled up by the solid one, Haider, who applied his golfing skills most effectively and found his way to the winning route and ultimate triumph. In the final round, Haider had one birdie, fifteen regulation pars and just two bogies, a final 18 holes score of net 68 and a three rounds aggregate of net 212, four under par. This steady effort of the final day was laudable and fetched Haider an illustrious reward in the shape of the prestigious Governor’s Cup title 2022.

What needs to be mentioned here is that fortune certainly favored Haider as he and a very young one Ahmed Ibrahim of Royal Palm Club ended the championship at the same aggregate score of 212 but Haider won because he had a better net score over the last 36 holes. It goes to the credit of Ibrahim that he put in an impressive effort and for him winning the runner-up position was laudable. A very talented one Abdullah Farooqi ended up third at an aggregate score of 213. In the race for gross honours, Salman Jehangir won the best gross. His score was 220. The second position went to Qasim Ali Khan with a gross score of 225 followed by Mohsen Zafar, third gross, score being 226. In the other events, Shafiq Bhatti of Defence Raya outsmarted his senior competing mates to win the seniors gross title. Asad Khan came second and Col Asif Mehdi was third. The net section winner was Asim Tiwana, AVM Fawad Younus was second net and Mian M Shabbir Nagiana was third net. The young one to shine in the boys’ category was Mohammad Afnan who impressed with his all round game. At the conclusion of the championship, prizes were awarded to the winners by Punjab Governor Baligh ur Rehman.