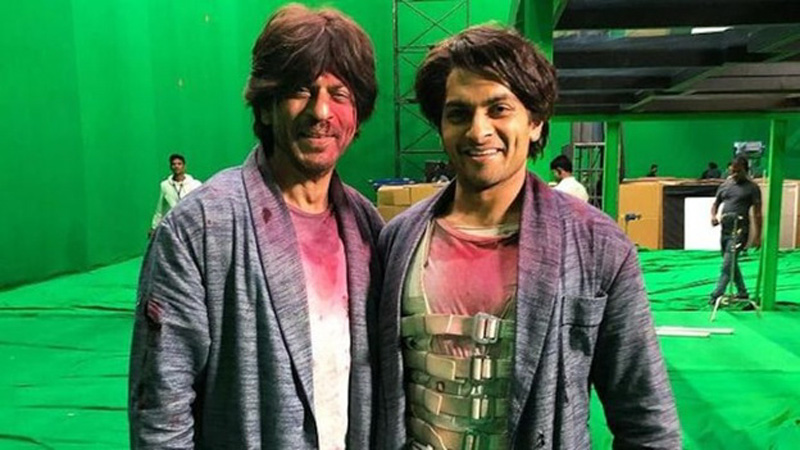 In an unseen picture, Shah Rukh Khan is seen posing with his Brahmastra stunt double Hasit Savani. The photo is now going crazy viral on the internet.

Shah Rukh Khan impressed everyone with his special appearance in Brahmastra. The actor made a cameo as Mohan Bhargava AKA Vanar Astra of Brahmansh.

Though his character was short-lived, the superstar wowed the audiences with his strong screen presence in Brahmastra as scientist Mohan Bhargav. Hasit Savani, who was the stunt double for Shah Rukh Khan in the film, has now shared a BTS picture from the sets.

Hasit Savani was the stunt double for Shah Rukh Khan in Brahmastra. He took to his Instagram account to share a BTS picture with the Bollywood superstar from the sets. SRK is seen smiling happily as he posed with Hasit. “A real pleasure to be the stunt double for the legend, Shah Rukh Khan, for his cameo sequence in Bollywood film Brahmastra (sic),” Hasit captioned the image which is now going viral on the internet.

2023 is going to be the year for Shah Rukh Khan. The actor makes his full-fledged comeback to movies with Pathaan on January 25, 2023. The actor will be seen alongside Deepika Padukone and John Abraham. Post that, SRK will be sharing screen space with Nayanthara in Jawan, directed by Atlee. Towards the end of 2023, Shah Rukh will treat his fans with his appearance in Rajkumar Hirani’s Dunki with Taapsee Pannu.

Brahmastra is a superhero drama that revolves around a simpleton who shares a special bond with fire. It features Alia Bhatt as the leading lady and marks her first collaboration with Ranbir Kapoor.

The cast includes Nagarjuna, Mouni Roy and Amitabh Bachchan. It is directed by Ayan Mukerji. Shah Rukh Khan has a cameo in the movie. Brahmastra opened in the theatres on September 9.