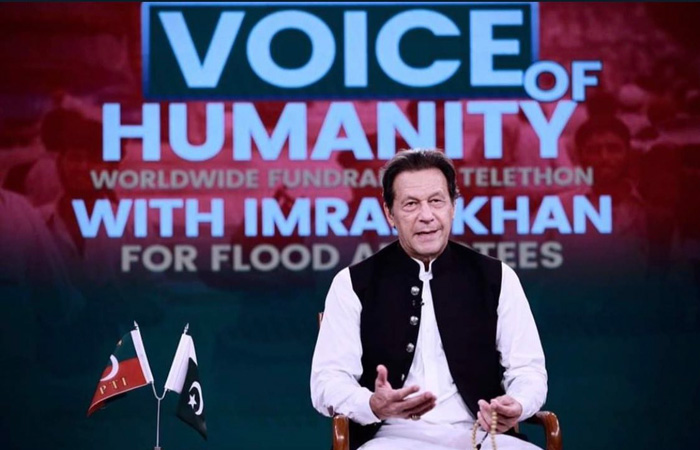 Former prime minister and PTI Chairman Imran Khan said on Sunday that holding immediate elections was not just crucial for his party but for the entire country ‘as revolution is knocking at our door’, a private TV channel reported.

In a meeting with the members of Punjab cabinet, the former premier said peaceful transition of power should take place through free and transparent elections. “The revolution should come through peaceful polls,” he was quoted as saying in the meeting.

Imran said that the people are with the PTI and emphasised the need for holding immediate elections, saying it was need of the hour for the country.

During the meeting, he also congratulated the Punjab cabinet members on PTI’s thumping victory in the recently-held by-elections.

He said that PTI’s victory in the Punjab by-polls exhibited the nation’s confidence. He added that Chaudhry Pervaiz Elahi is a practical politician and PTI will fully support him. “In Punjab, the nationals expect the fulfilment of the real independence’s promise from the PTI.”

The former prime minister asked the Punjab cabinet and parliamentary party to firmly stand with the nation with the narrative of real independence. “Nation is with us and we have to go ahead for elections soon. The early election is not the requirement of the PTI but inevitable for the betterment of the country,” said Khan.

Imran said that people in Punjab were looking towards the PTI to achieve “real freedom” for them. “Punjab cabinet and parliamentary party should stand with the people on the stance of real freedom,” he added.

Separately, Imran khan held third telethon to raise funds for rehabilitation of flood victims in Pakistan, saying that the real issue after floods is to rehabilitate the affectees.

Addressing the telethon, Khan said that never in the history, such a huge amount was collected during few hours of telethons. “We will be using these funds in a transparent manner and will devise a system that will bring transparency in their utilization,” he assured.

He recalled how his government brought transparency in utilization of COVID funds through Ehsaas programme.

The PTI chairman lamented Prime Minister Shehbaz Sharif for being on foreign tours during devastating floods in the country. “This is insensitive from the prime minister to go abroad as the country drowns,” he said.

The overseas Pakistanis participated in the telethon and spoke directly to Imran Khan via telephonic calls to offer their donations for the flood-hit victims.

The party claimed that it has received pledges of Rs 3.57 billion from the donors during the third telethon.