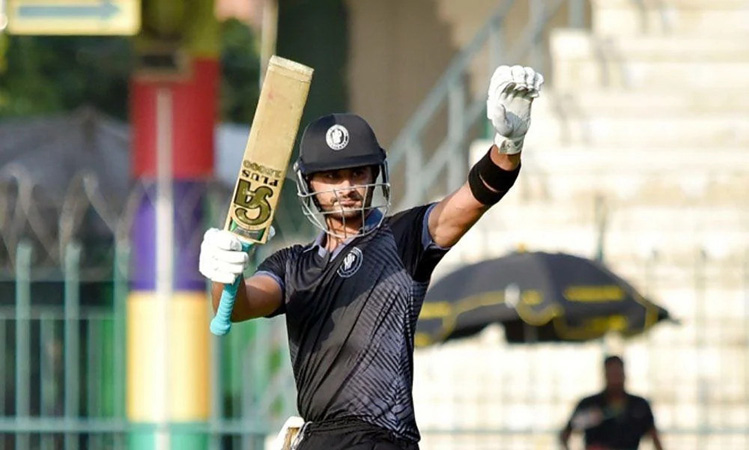 MULTAN: Sahibzada Farhan blasted 102 off 64 to seal a 38-run win for Khyber Pakhtunkhwa over Balochistan in the 29th fixture of the National T20 Cup 2022-23 at Multan Cricket Stadium here on Saturday. The win also confirms Khyber Pakhtunkhwa place in the semi-final after topping the six-team table with 12 points from 10 matches. After being put into bat, Khyber Pakhtunkhwa openers Farhan and Rehan Afridi provided a solid 71-run start. Wicketkeeper-batter Rehan was the first one to return to the pavilion not before scoring 34 from 25 balls, which included six boundaries. Farhan was joined by Kamran Ghulam (26, 21, one four, one six) and the pair knitted a 64-run partnership for the second wicket. Farhan continued to play shots at will and brought up his century from 61 balls which included seven fours and six towering sixes.

After the dismissal of right-handed Farhan for 102 in the 19th over, the defending champions managed to add only seven in the final over to end up scoring 175 for the loss of three wickets in their allotted 20 overs. Experienced Junaid Khan was Balochistan’s pick of the bowlers with two for 34. Chasing 176 to win, Balochistan lost wickets at regular intervals and were bowled out for 137 in the 17th over. Haris Sohail coming to bat at number five top-scored with a 30-ball 47, studded with five fours and two sixes. For Khyber Pakhtunkhwa, skipper Khalid Usman and right-arm leg-spinner Maaz Khan bagged three wickets apiece. Mohammad Abbas Afridi grabbed two wickets for 20 runs.