‘Be ready, movers and shakers’ 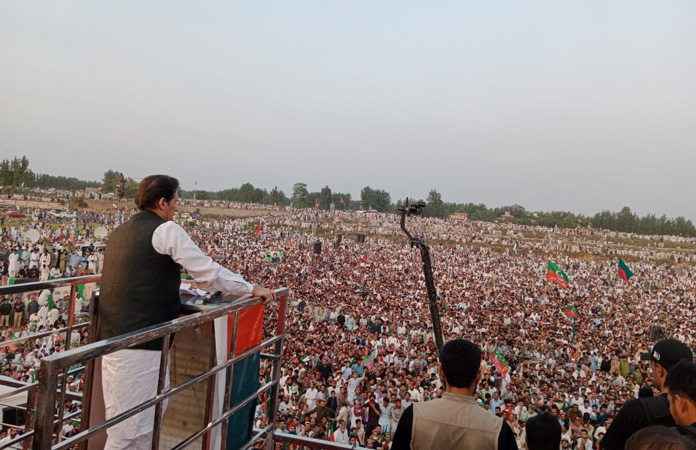 Former prime minister and Pakistan Tehreek-e-Insaf Chairman Imran Khan has warned the “imported government and its backers” to hold the early and transparent elections to let the change come through the power of vote, warning that the situation would get out of control if polls were delayed any further.

“If you stop this ‘peaceful revolution’ then as World Bank has predicted the game would get out of everyone’s hand. Let the change come through vote,” he said while addressing his party’s power show in Charsadda on Saturday.

Imran while addressing the coalition government said, “No matter what you do you cannot win this match you have already lost this match… economy is sinking fast and the world is not willing to give the government financial aid for flood victims.” “Sindh is worst-hit from floods but because of Zardari, the international community is not ready to help,” said the former premier.

The PTI chairman said there is still time to steer the country out of quagmire by holding free and fair elections, adding that “the time is not far when he gives call to the nation to achieve real freedom”.

He added that the economy would only continue declining further if new elections were not held. Quoting the International Monetary Fund (IMF) and World Bank reports, Imran claimed that the country was going down under the incumbent rulers. “Pakistan is going to become Sri Lanka. Those responsible for toppling my government will not be forgiven,” he added. While comparing his tenure with the incumbent government, Imran said prices of everything including fuel and electricity have gone through the roof. Speaking about the rise in terrorist attacks in Khyber Pakhtunkhwa, Imran urged the federal government to fulfil its duty and restore law and order in Malakand district of the province.

There has been a surge of targeted killings and extortion in KP, particularly in Malakand division. As the law and order situation deteriorates amid reports of the presence of militants, hundreds of people, including elders and students, have taken to the streets in Swat and Shangla recently to protest against the new wave of terrorism.

Imran said his party-governed KP suffered the most by joining the US war on terror, and added that Pakistan should not participate in any conflict under the servitude of any superpower.

The PTI chairman, while urging his followers to take to the streets when he would give a call, said that Pakistan would not become a slave of any superpower.

“We sacrificed the lives of 80,000 Pakistanis by participating in the war of America. We will have to make the foreign policy of the country free,” he stated.

He claimed that the incumbent rulers were imposed upon the country through a ‘conspiracy’ because “America wanted our rulers to roam around the world like beggars, but we will not compromise on our country’s foreign policy for any country”. “They (incumbent government) came to power to shut down their corruption cases and I just got to know that Ramzan Sugar Mills case is also being closed down,” he said.

The former PM claimed that witnesses in the money laundering case died of heart attacks, “but they were killed it will come to fore when transparent investigation is held”.The PTI chairman further said that the incumbent rulers say that the PTI government laid landmines, but when the PTI assumed power in 2018, the external deficit was $20 billion, and when it left the government on April 9, the external deficit was $16 billion and the income was $31 billion. Despite the pandemic, record exports were being made with the record production of four crops during the PTI government’s tenure. Imran said rupee has lost 30 percent of its value since the PML-N-led coalition government came to power.

Calling upon the nation not to vote for those leader who have offshore assets, Imran said if he came to power again, he will not spare anyone, adding that those whose wealth is stashed abroad will not be made ministers in his government.