Chehlum processions taken out across Pakistan 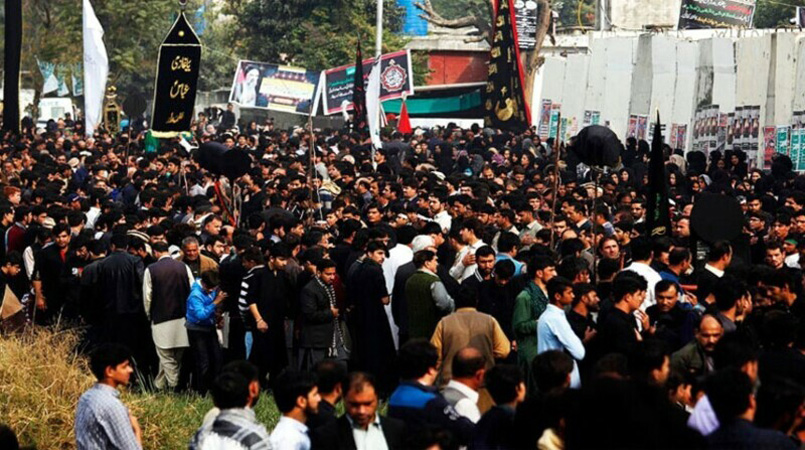 The Chehlum of Imam Hussain (AS) and his companions was observed across Pakistan on Saturday with due reverence and solemnity.

Processions of zuljanah and tazias in various major cities with hundreds of mourners accompanying them and reciting nohas were marching as security in major cities was beefed up.

On Friday, the Interior Ministry deployed armed troops in all four provinces including Islamabad, Gilgit-Baltistan and Azad Jammu and Kashmir under Section 4(3)(i) of the Anti-Terrorism Act 1997. A Central Control Room was also established at the ministry to monitor the overall security situation in the country.

The main procession in Karachi, which was taken out from Nishtar Park at 1pm, was to pass through its traditional route and culminate at Husanian Iranian Imambargah in Kharadar.

Separately, a procession was also taken out from the Imambargah in Martin Quarters earlier in the day. It will join the main procession at Nishtar Park at 2pm on MA Jinnah Road from Gurumandir.

During the course of this journey, mourners were set to cover Sir Shahnawaz Bhutto Road, Mehfil-i-Shah-i-Khorasan, MA Jinnah Road, Mansfield street, Preedy Street and Bolton Market. All roads leading to the procession route have been closed for traffic, while mobile phone services will remain suspended. In Lahore, more than 8,000 police officers were deployed along the route of the procession, Lahore DIG Operations Afzaal Ahmed Kauser said.

“Community volunteers, elite and anti-riots force and plainclothed police jawans have also been deployed,” he said, adding that the central procession was being monitored by the Safe Cities Authority and district administration cameras.

Meanwhile, the Islamabad police have said that the main procession of the day passed in the city peacefully. “All Shia-Sunni gatherings, processions and gatherings in Muharram and Safar are safe. Spreading religious confusion and propaganda on social media should be avoided. Legal action can be taken against those who spread mental confusion and propaganda,” it tweeted.

On the other hand, another procession in Rawalpindi is underway. According to a report on Friday, schools, colleges and markets in the city are closed today. The police have chalked out a traffic plan and deployed more than 3,600 police and 236 wardens on Saturday. As part of the traffic plan, diversions will be placed at 12 points while snipers will be deployed on rooftops, streets, roads along the routes of the processions. Other roads will be sealed with razor wire and barricades.