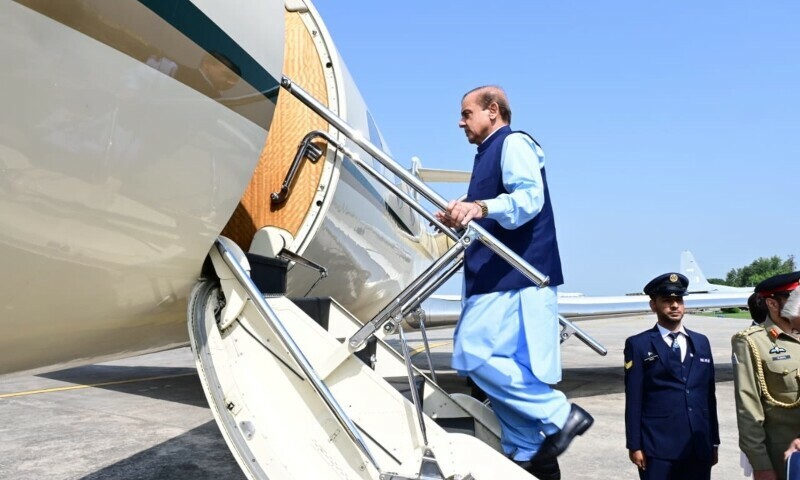 “At the invitation of the British government, Prime Minister Muhammad Shehbaz Sharif will represent Pakistan at the State Funeral of Her Majesty Queen Elizabeth II in London on 19 September 2022,” a press release issued by the Foreign Office said.

The premier is accompanied by Defence Minister Khawaja Asif and Special Assistant to the PM Tariq Fatemi.

According to a tweet by the Prime Minister’s Office, after attending the funeral, Shehbaz will head to the United States to participate in the debate of the 77th session of the United Nations General Assembly, which will be held from September 20 to September 26. World leaders began gathering in London from Saturday for the funeral of Queen Elizabeth II, as princes William and Harry were set to lead a vigil of her grandchildren at her coffin.

The queen’s death on September 8 aged 96, after a record-breaking 70 years on the throne, has sparked an outpouring of emotion. Members of the public braved waits that at one point were estimated to be up to 24 hours and chilly night-time temperatures to view her coffin.

Lines have snaked for miles along the River Thames since Wednesday when her coffin was brought to the UK parliament complex to lie in state. Police are mounting Britain’s biggest-ever security operation for Monday’s funeral, as hundreds of dignitaries including US President Joe Biden are set to jet in. The queen’s successor, King Charles III, will meet on Saturday with the prime ministers of the Commonwealth realms — the 14 former colonies over which he now reigns in addition to Britain.

From Australia and New Zealand to Canada, they have formally proclaimed him their new sovereign. But republican movements are gaining ground, and efforts to keep them all in the royal fold will likely be a feature of his reign.

Charles on Friday wrapped up his maiden tour as monarch to the four nations of the United Kingdom with a visit to Wales, part of an operation dubbed “Spring Tide” to launch him in his new role. Large crowds in Cardiff chanted “God save the king” as he shook hands with well-wishers following a multi-faith service in Llandaff Cathedral, and at Cardiff Castle.

Charles met Welsh First Minister Mark Drakeford, an avowed republican, and there was isolated booing on the streets after the new monarch was quick to declare his son William the new Prince of Wales. But Drakeford said questions over the future of the monarchy were “a footnote to the dominant feelings of the day”.