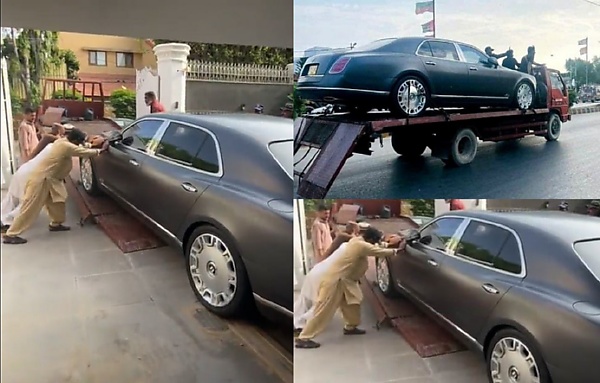 On Saturday, the police submitted a challan in Karachi court in a case regarding the recovery of a luxury Bentley car stolen from Britain.

Two accused Naveed Yameen and Muhammad Suhail have already been detained in this matter.

According to the challan, the two were charged with stealing Rs300 million by failing to pay tax duty. They violated customs laws and diplomatic immunity rules.

Furthermore, the challan said that the car was retained without paying tax duty while taking advantage of diplomatic immunity.

A man named Shafi purchased the luxury car for Rs37.5 million which is just a small amount of the total worth of the Bentley car.

According to the challan, accused Yameen sold the car to a citizen, Shafi, through a broker named Naveed Balwani.

The police in its challan said that they were investigating the role of excise authorities in the registration of the car in Karachi.

The car was imported in the name of a Bulgarian ambassador after producing the diplomatic immunity certificate.

The Bulgarian ambassador came to Pakistan in Sept 2019 and went back in Sept 2020.

The Bulgarian Embassy had asked the police to seize the expensive car in case it was used for illegal purposes. The embassy also suggested that the car be deregistered because it was no longer being used.

All the accused are involved in the crime, the challan concluded.