* Still appearing together, the pairs walked to look at the flowers placed on the ground by mourners 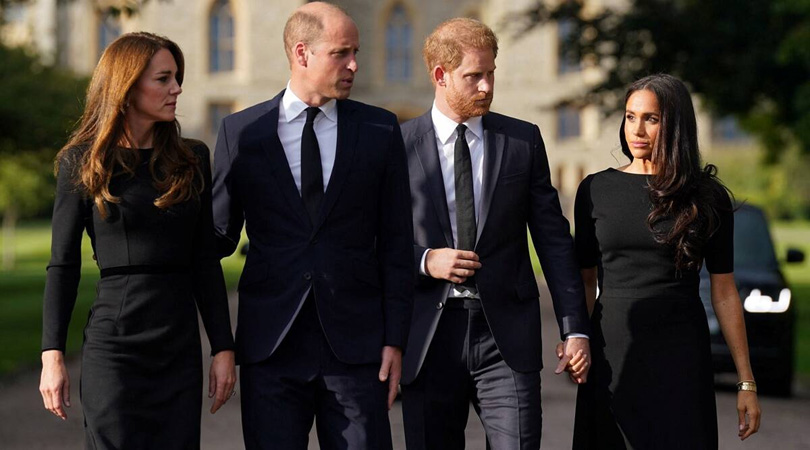 The next generation of the royal family is all together. Prince William and Prince Harry, along with their respective wives Kate Middleton and Meghan Markle, put on a united front during a joint appearance outside Windsor Castle on Sept. 10 following Queen Elizabeth II’s death and her son King Charles III’s accession to the throne.

This marks the first time in more than two years that the couples, once dubbed the “Fab Four,” have been photographed together. The couples appeared side-by-side on the grounds of the estate, which served as the late monarch’s home for most of the past two years amid the COVID-19 pandemic. The queen died at her vacation home in Balmoral Castle, Scotland at age 96 on Sept. 8.

Still appearing together, the pairs walked to look at the flowers placed on the ground by mourners. William, Kate, Harry and Meghan then split off to greet the crowds gathered outside the gates of Windsor Castle. William was handed a Paddington Bear toy-a note to a sketch featuring the character and the queen during her Platinum Jubilee. Mourners brought their children and even a dog.

One supporter, a 14-year-old girl, talked to CNN about hugging Meghan at the event. “She came and asked my name and how my day was, how long I was waiting and I asked her if I could have a hug and she hugged me back,” she said. “It was just such an amazing moment.”

The teen continued, “I just felt like I need to, in a way. I just really wanted to at least hug her because I look up to her in some ways and it just felt like it was the right thing to do…It was quite nice to see William and Kate and Meghan and Harry together. I just wanted to show her that she’s welcome here, I guess. I wanted to hug her after everything that’s happened, really, now.”

For the past few years, reported tensions have mounted between both William and Harry and Kate and Meghan, fuelled further after the Duke and Duchess of Sussex stepped back from their roles as senior royals in 2020.

Still, Harry has remained close with some in his relatives. He and Meghan visited the queen in April, when he noted that she was “on great form” and still had her “great sense of humor.” It was the Sussexes’ first joint trip to the UK since relocating to the United States. Harry has visited on his own a few times, including to attend his grandfather Prince Philip’s funeral in 2021.

He and Meghan also travelled this past summer for the queen’s Platinum Jubilee, where they were photographed with other royals, and were in London for the WellChild Awards at the time of her passing.

Their reunion with Kate and William in Windsor came a day after the king paid tribute to the queen and both his sons in a pre-recorded speech, during which he confirmed William and Kate would now be known as the Prince and Princess of Wales, the latter title previously held by his children’s late mother, Princess Diana.

In his televised address, Charles also said, “I want also to express my love for Harry and Meghan as they continue to build their lives overseas.” The Sussexes moved to North America following their royal exit and live in California with their children, Archie Harrison and Lili “Lilibet” Diana, who are now also officially entitled to use prince and princess titles.

The couple’s photographed reunion in Windsor did not include the Sussex children nor Kate and William’s kids Prince George, Princess Charlotte and Prince Louis-who all now have Wales as their surname. The adults’ appearance came several hours after William, the new heir to the throne, joined Charles at an Accession Council ceremony in London, where the new monarch was formally proclaimed the new King of the United Kingdom.

William and Harry both travelled separately to try to see the queen before her passing, following a Buckingham Palace alert that she had fallen ill, but multiple outlets have reported that only Charles and his sister Princess Anne were able to make it in time. Kate and Meghan did not join their husbands on their trip to Scotland.

Earlier on Sept. 10, William shared a tribute to his late grandmother on Instagram. “On Thursday, the world lost an extraordinary leader, whose commitment to the country, the Realms and the Commonwealth was absolute,” he wrote. “So much will be said in the days ahead about the meaning of her historic reign.”

He continued, “I, however, have lost a grandmother. And while I will grieve her loss, I also feel incredibly grateful. I have had the benefit of The Queen’s wisdom and reassurance into my fifth decade.”