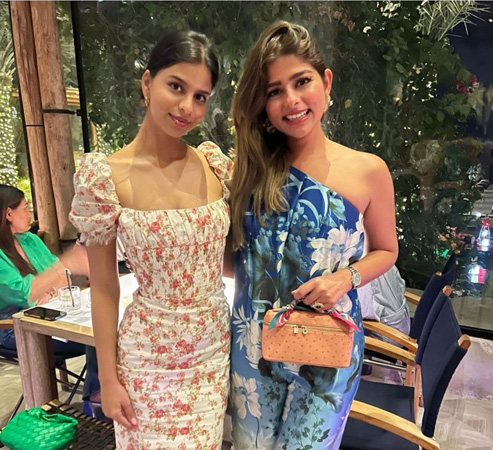 A Suhana Khan doppelganger took to her Instagram and shared a picture with her. Suhana met Bareeha, an influencer from Pakistan, while vacationing in Dubai with her mom Gauri Khan, her best friend Shanaya Kapoor and Shanaya’s mother Maheep Kapoor. Both of them smiled while posing for the camera in an outdoor shot. Suhana can be seen wearing a white floral dress and Bareeha wore a blue floral jumpsuit and carried a small sling bag.

Bareeha captioned the post, “Finally met my doppelgänger @suhanakhan2. Here’s a side by side comparison for all the people who keep sending me her pictures in my DMs.” She used the hashtags #iamsrk #twinningandwinning #seeingdouble on the pictures. One of her fans commented, “FINALLLLLLLLY WHEN SISTER MET SISTER !! hahahaha i cannot believe this !!!” Another fan wrote, ” Omg I have been thinking this for a while now.” Other fan wrote, “Oh my god!! this is crazy.” Many of her fans posted heart emojis on her picture.

Suhana Khan is the daughter of actor Shah Rukh Khan and interior designer Gauri Khan. Suhana is all set to make her acting debut. She is a part of the highly-anticipated Netflix film, The Archies. It will also mark the acting debut of Amitabh Bachchan’s grandson Agastya Nanda, and the late Sridevi’s younger daughter Khushi Kapoor.

In the film, Agastya will be seen as Archie while Khushi plays the character based on Betty and Suhana as Veronica. It also has Dot, Mihir Ahuja, Vedang Raina, and Yuvraj Menda. According to the producers, “The film has the iconic gang of The Archies’ at the center of it, and perfectly matches the youthful energy, hope and excitement of the sixties era.”Earlier in June, director Zoya Akhtar had announced the completion of the shooting schedule in Ooty. It will release next year.