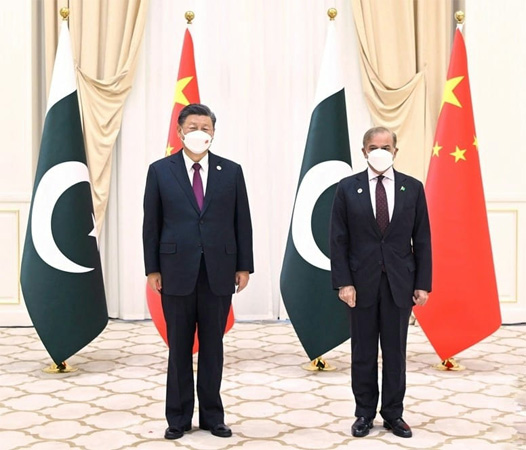 Prime Minister Shehbaz Sharif on Friday met Chinese President Xi Jinping here wherein he appreciated the transformational impact of the China Pakistan Economic Corridor (CPEC) on Pakistan’s socio-economic development. During the bilateral meeting took place on the sidelines of the annual meeting of the Council of Heads of State of Shanghai Cooperation Organization here, the prime minister also reaffirmed his government’s commitment to high quality development of CPEC. President Xi pointed out that China and Pakistan are close neighbors linked by mountains and rivers and with a shared future. “The two countries have all along stood with each other through thick and thin. No matter how the international situation evolves, China and Pakistan are always each other’s trustworthy strategic partners. China will work with Pakistan to advance their all-weather strategic cooperative partnership and accelerate the building of a closer community with a shared future between the two countries in the new era,” Xi said. President Xi stressed that the two sides must continue to firmly support each other, foster stronger synergy between their development strategies, and harness the role of the Joint Cooperation Committee of the China-Pakistan Economic Corridor (CPEC) to ensure smooth construction and operation of major projects. It is important to expand cooperation in such areas as industry, agriculture, science, technology and social welfare to create new impetus for the CPEC’s development.

China hopes that Pakistan will provide solid protection for the security of Chinese citizens and institutions in Pakistan as well as the lawful rights and interests of Chinese businesses. China commends Pakistan for taking the lead in actively supporting the Global Development Initiative and the Global Security Initiative, and will work with Pakistan to promote the implementation of these two initiatives. The two sides need to enhance communication and collaboration within the United Nations, the Shanghai Cooperation Organization and other multilateral platforms to voice the developing countries’ rightful opposition to bloc confrontation and commitment to multilateralism. Both the leaders reviewed the entire gamut of bilateral relations and exchanged views on important regional and international issues of mutual interest. This was the prime minister’s first meeting with the Chinese president since assuming office in April 2022. The interaction between the two leaders was marked by traditional warmth as well as exceptional mutual trust and understanding.In his welcoming remarks, the Chinese president described Prime Minister Sharif as “a person of pragmatism and efficiency”. He also added that the prime minister was a leader with “a longstanding commitment to China-Pakistan friendship”.

Noting the enduring nature of China-Pakistan bilateral ties, the prime minister underlined that our ‘All-Weather Strategic Cooperative Partnership’ and Iron-brotherhood had withstood the test of time.

He reaffirmed his personal resolve to take their bilateral relations to greater heights. Prime Minister Sharif extended his best wishes to President Xi Jinping and the Communist Party of China for the forthcoming 20th CPC National Congress.

He underscored that the SCO provided an excellent forum to further their shared vision and mutual values into concrete plans for regional cooperation and integration.

The prime minister thanked President Xi, the government and the people of China for the generous and timely support to the flood affected people in Pakistan. He said that the outpouring of sympathy and support from all quarters across China was touching and a true reflection of the “unique” friendship between China and Pakistan.

He condoled with President Xi over the tragic loss of life and devastation caused by the earthquake in Sichuan Province on September 5, 2022, emphasizing that the Government and people of Pakistan stood with China in the face of this natural calamity.

Both leaders welcomed the signing of a Protocol to the Framework Agreement on ML-1 Railway Project.

Prime Minister Sharif reiterated Pakistan’s consistent and unwavering support to China on all issues of its core interest including Taiwan, Tibet, Xinjiang and Hong Kong. He also thanked the Chinese government for support extended to Pakistan for its sovereignty and territorial integrity, FATF, national development, COVID-19 pandemic and other areas.

Sharing his views with President Xi on the international situation, the prime minister highlighted that challenges like climate change, health pandemics and growing inequalities could only be tackled through cooperation of all nations in accordance with the UN Charter.

Prime Minister Sharif highlighted the serious human rights situation in the Indian Illegally Occupied Jammu and Kashmir and thanked China for its principled stand on the dispute. The two leaders reaffirmed their resolve to building the Pakistan-China Community for Shared Future in the New Era.

The prime minister renewed his invitation to President Xi Jinping to undertake a state visit to Pakistan, underlining that the people of Pakistan were looking forward to accord a warm welcome to him.

While acknowledging the invitation, President Xi stated that he was looking forward to Prime Minister Sharif’s visit to China at an early date.