Another day of protest in Swat 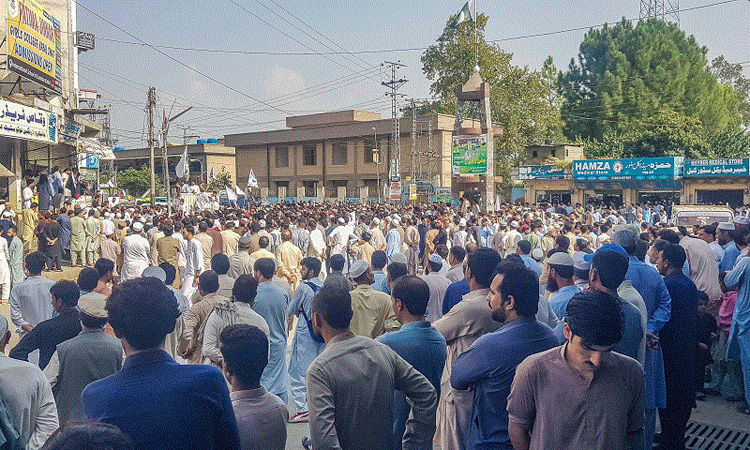 Hundreds of people took to the streets in Khyber Pakhtunkhwa’s Swat valley on Friday against the recent wave of militancy in the area, demanding police action as they warned of more protests if the spate of terrorism continued, a private
TV channel reported.

Earlier this week, eight people, including a former Aman Committee head and two policemen, were killed when a remote-controlled bomb struck their vehicle in the Ghlo Kandaw area of Kabal Tehsil in Swat valley. Former peace committee head Idrees Khan, two police guards Ramail and Tauheed, and a child were on their way from Kotakay to Bandai village when the bomb, planted on a dirt road, went off, leaving four people dead on the spot. Two pedestrians were also killed in the blast. Two more corpses were found later. The attack was claimed by the outlawed Tehreek-i-Taliban Pakistan (TTP) which stated that Idrees had been on their hit-list for nearly 13 years.

The residents have been holding protest rallies for some time against the growing wave of terror. Voicing concerns against the growing militancy in the area, the protesters converged at Kabal Chowk after Friday prayers today, holding placards and banners inscribed with slogans including “we want peace, save our lives”. One of the slogans read: “We want books instead of guns.” A large number of civil society members, lawyers, local political leaders took part in the protest.

One of the protesters said it was odd that hundreds of people had taken to the streets against terror in an era when other nations were advancing in science, robotics, artificial intelligence and e-commerce. He said it was disappointing for the residents to converge on the streets to demand their basic rights.

Other protesters said it was beyond comprehension that terrorists were openly disrupt law and order while authorities were allegedly keeping mum. “It is enough. We will no longer tolerate these activities and if the law enforcement agencies and police fail to take action against terrorists and anti-state elements, then the people of Swat will themselves stand against rogue elements and take action,” a social activist said.

Some parents also brought their children with them and said they had witnessed the horrific period of militancy in Swat from 2007 to 2009, adding they had yet to recover from the terror more than 15 years ago. The protesters vowed that they would resist the resurgence of terrorism in the valley come what may. The demonstrators said they would stage another protest at Nishat Chowk in Mingora on Sunday.

Swat valley came under the sway of militants in 2007 when the Taliban challenged the writ of the state under Mullah Fazlullah. A decisive military operation succeeded in eliminating militancy from the region in 2009. But there have been reports of late that militants have resurfaced after 12 years and they are threatening villagers with dire consequences if they denounce them to the authorities.