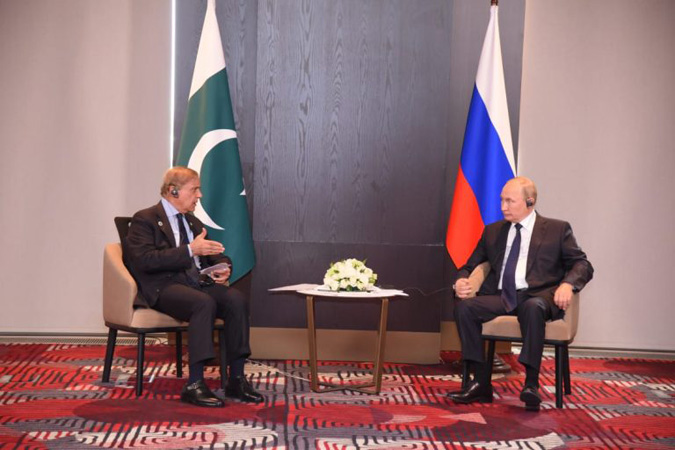 Prime Minister Shehbaz Sharif met Russian President Putin on the sidelines of the Shangai Cooperation Organisation (SCO) summit in Samarkand. During the meeting, Putin said that pipeline gas supplies to Pakistan were possible and that part of the necessary infrastructure was already in place, Reuters quoted Russian state-owned news agency RIA as saying. While calling for need to work on connectivity and energy projects, Putin discussed possibility of Pakistan Russia Stream Gas Pipeline project which he said required the infrastructure for delivery of LNG to Pakistan, according to a statement issued by the Russian presidency. It was highlighted that the political stability in Afghanistan was essential to accomplish the connectivity projects.

He said Russia saw Pakistan as a priority partner in Southeast Asia and Asia as a whole and the relations between the two countries were developing “absolutely positively.”

He expressed condolences over the loss of life caused by floods in Pakistan. He said Russia had dispatched the necessary humanitarian aid to Pakistan and was ready to help organise assistance to the flood victims. President Putin said regrettably, the Pak-Russian bilateral ties subsided due to the pandemic, but the next meeting of the intergovernmental commission was scheduled to take place in Karachi this autumn. He hoped that during the upcoming meeting, both sides would not only find ways to restore mutual trade but also to increase it.

The prime minister thanked President Putin for Russia’s expression of solidarity and support for the people affected by the massive floods in Pakistan. He also shared details of the devastating impact of this climate-induced calamity. Prime Minister Sharif expressed satisfaction at steady growth of Pakistan-Russia relations, which were marked by strong mutual trust and understanding. It was agreed to convene the next meeting of the Inter-Governmental Commission (IGC) in Islamabad at an early date.

Separately, Prime Minister Shehbaz Sharif and President of Uzbekistan Shavkat Mirziyoyev on Thursday met on the sidelines of the meeting of Shanghai Cooperation Organization (SCO) and discussed issues of mutual interest.

Prime Minister Shehbaz Sharif on Thursday expressed Pakistan’s resolve for the timely completion of the important CASA-1000 power project, aimed at the transmission of electricity from the Central Asian state.

In a meeting with Tajikistan’s President Emomali Rahmon on the sidelines of the SCO Heads of Council meeting in Samarkand, the two leaders held wide-ranging talks covering all aspects of the mutually beneficial bilateral cooperation including regional and international issues.

The prime minister emphasized the expansion of cooperation in the field of road transportation and underscored the importance of connectivity. He underlined Pakistan’s readiness to facilitate the provision of access to Gwadar and Karachi to Tajikistan. President Rahmon extended profound sympathies and condolences over the loss of human lives and devastation caused by the floods in Pakistan and assured of Tajikistan’s full support in the efforts for relief and rehabilitation of the affected people.

PM Sharif thanked Tajikistan for its support to the flood-affected people in Pakistan and shared details of the devastation caused by the massive floods, induced by climate change.

The prime minister expressed satisfaction over the growing political, trade, economic, and cultural cooperation between the two countries.

Both leaders accorded particular focus on further strengthening of reliable and constructive high-level contacts, inter-parliamentary ties, defence and security relations between the two countries. The prime minister underlined the importance of regular meetings of bilateral institutional mechanisms and establishment of mutually beneficial cooperation in the implementation of energy projects. The leaders also exchanged views on regional and global issues of mutual interest and agreed to work together to strengthen peace, stability and security in the region, particularly in Afghanistan. Foreign Minister Bilawal Bhutto Zardari, Defence Minister Khawaja Asif and Finance Minister Miftah Ismail, Foreign Secretary Sohail Mahmood and senior officials were present.