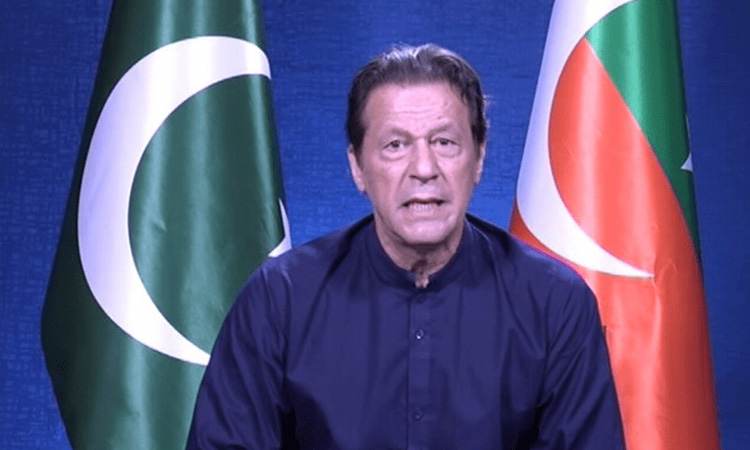 Pakistan Tehreek-e-Insaf (PTI) Chairman Imran Khan on Thursday reiterated his demand for early “free, fair and transparent” general election to end economic crisis and inflation in the country. Elections should be announced immediately, as otherwise the crisis would continue, he said in his televised address.

“If we want to save the country from discord and chaos, free and fair elections need to be announced immediately,” he said as he warned that PTI’s patience was wearing thin. “We will not stay patient for too long. If they [coalition government] keeps pushing us against the wall, we will have no choice but to call on the public,” he said, adding that the economy was heading towards a downfall, leading to people’s suffering.

Imran said that he had decided to talk to the nation as he feared the government had no way to prevent the economy from collapsing. “The second fear I have is that unless political stability arrives [to the country], there can be no economic stability,” he highlighted. “The incumbent government does not have any credibility, both inside and outside Pakistan, especially in the financial markets,” the ex-premier alleged.

Imran said that the coalition government, when it first came to power, had claimed that economic stability would come once the International Monetary Funds programme was finalised. “But the conditions today are in front of the people. “They agreed to all the IMF conditions and then came the historic inflation […] Pakistan has never seen inflation like this in its history […] the rupee is still depreciating and will continue to fall, until political stability arrives,” he pointed out.

The party chairman put forward some statistics, saying that his government left the foreign exchange reserves of $16.2 billion, adding that at present, the country was facing inflation and unemployment and was heading in the direction of Sri Lanka.

“Pakistan will receive $8 billion from the IMF, the World Bank, and the Asian Development Bank, while the rest $22 billion will have to be financed from other countries,” said Khan. He added that Pakistan has to pay $30 billion in loans this year.

The PTI chairman then said that the only way out of these crises was free and fair elections, asserting that delaying the polls would only lead to losses for the country. “If anyone thinks that we [PTI] are facing a loss because of delayed elections, I can claim, that never in Pakistan’s history did a political party have popularity as much as PTI did. If there is one federal party that can unite Pakistan, it is PTI.” He said that “big criminals” sitting atop Pakistan had realised that PTI’s popularity could not be confronted.

Debunking the government’s claims that PTI left behind “landmines”, Imran recalled that when his party came to power in 2018, the country’s current account deficit was at $20 billion. “We brought more dollars into the country and reduced our deficit, but propaganda is done again and again,” he said. Criticising the government’s response to floods, the PTI chief alleged that the coalition allies did not have any road map or plan for rehabilitation. “We can only see them begging the world for money.” Going on, he said that the prices of fuel and electricity across Pakistan were reaching their all-time high and warned that they would further increase in the near future.

Unemployment is increasing, inflation is rising, and businesses are closing down, Imran said. “The danger I am seeing right now […] Our credit rating has fallen to negative […] do you know what this means? They think Pakistan doesn’t have the ability to repay and due to this, the cost of loans will increase.” He recalled that before the no-confidence movement, he had warned the “powerful people” that the not-trust vote would directly impact the economy. “Our risk rating was 5pc on March 4 and as soon as they tabled the vote of no-confidence, in four days it went to 9pc.” Hence, the PTI chief reiterated, fresh polls should be announced immediately. “If political stability doesn’t come, the economy won’t stabilise, it will go down. So I want to tell my people today that we need to have elections quickly to save Pakistan from this swamp.”