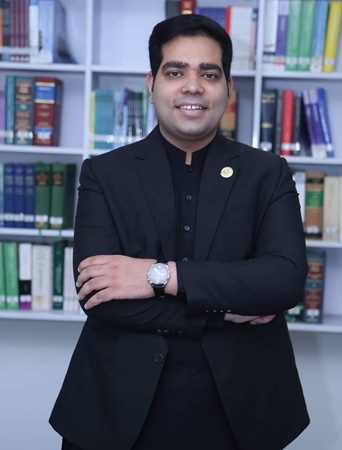 “If you ever face a problem, raise your voice against it and keep adding more voices to it until that problem is solved.” This is the ultimate message of Fahad Shahbaz, President Youth General Assembly, to every single youngster in Pakistan.

He is the Founder of the Youth General Assembly (YGA), an assembly that has been formed to provide a platform for the youth of Pakistan to draft legislation on the basis of qualified ideas and get those resolutions to reach the Government Institutes in order to reduce national crises. Fahad Shahbaz is the Founder and President of the Youth General Assembly, a youth-led organisation which is working to empower the youth of Pakistan.

Sitting in the plush office where the interview was conducted, occupying the high-backed leather chair, dressed in his signature, pristine black shalwar kameez, was Fahad Shahbaz. He looked perfectly at ease. With a professional demeanour, and his left ankle crossed over his right knee, speaking in his deep, confident voice, Shahbaz appeared much older than his 25 years. His mannerisms were impeccable.

Having studied in a public school, and then a University of the Punjab. He has done his master’s in media studies and is currently enrolled as a student of LLM in the UK. This was the kind of thinking that led to the birth of his brainchild Youth General Assembly and all the associated civics and social causes with it. It was the first initiative of its kind and was the most unique.

Shahbaz had always been an excellent debater and public speaker, but he also had this drive to do something for the betterment of Pakistan and its people. YGA brought both his passions together. He now recruits members from all over Pakistan into the assembly and coaches them on how best to give voice to the ideas taking root inside their heads. It is his mission to make sure that the youth’s intelligent solutions to Pakistan’s major and minor problems reach the right ears instead of landing in the trash like most resolutions. Shahbaz believes that the “Youth General Assembly acts as a bridge between the state and the youth”.

Youth General Assembly is not a static body being run by a couple of idealistic students. It has a proper hierarchy through which it operates. At the top is the advisory board, which comprises of experienced politicians like Justice Nasira Javed Iqbal, Makhdoom Javed Hashmi, Hamid Khan, Suhail Warraich, Shaista Pervaiz, Nawab Ghous Bakhs Baraozai and others. Then comes the council of mentors that consists of prominent youth like barristers, and television anchor persons for regular council, after which comes the Patron, Chairperson, President, Secretary General and Managing Director.The organization has three different forums: Media, Business and Legal, the forums engages the students in various activities and programs to enhance skills in youth in their respective fields. Any resolution drafted by the members is carefully reviewed and checked by expert members of YGA whose council is essential in making the proposals practical.

Youth General Assembly has successfully worked on the recognition of transgender as the third gender, working tirelessly towards giving them passports bearing their identity and the Transgender Persons Act, 2018. It is not long before the implementation of this idea is done by the government.

To the youth, he says, “Focus on your studies and use that knowledge to solve the problems of Pakistan. Your voice is your power. Learn to use it. Do not think politics is a curse because if educated people like us don’t join it, then we leave the door open for those with harmful intentions. Don’t let that happen.” Despite his serious aspirations and the immense tasks he has taken on, Shahbaz is still a youngster at the end of the day. There is a spark of intelligence and friendliness in his eyes that hints at the youth hidden behind his very professional and mature persona.