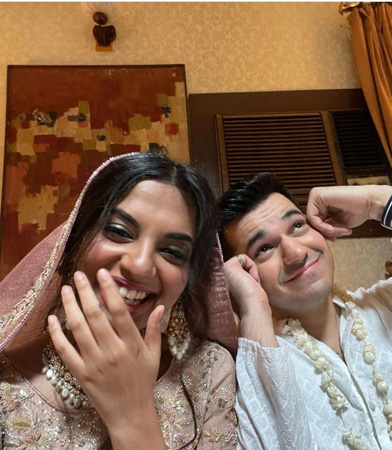 The latest pictures and videos of showbiz starlet Janice Tessa from the sets of her on-air drama ‘Habs’ are viral on social media.

Ahead of the episode 18 telecast of ‘Habs’ last night, the actor who plays Zoya in the serial posted a bunch of pictures and videos from the sets on the photo and video sharing application. The viral visuals see Janice Tessa along with co-star Hamzah Tariq and director of the show Musaddiq Malek. “Zoya just took off,” Tessa wrote in the caption of the Instagram post, referring to the scene of the drama from the latest episode where the character eloped with her beau, Aamir and secretly tied the knot.

One of the videos in the post feature BTS fun of the cast and crew after the wedding scene as they all shook a leg on the Bollywood track ‘Gallan Godiyan’ from ‘Dil Dhadakne Do’.

About the serial, ‘Habs’ starring A-list actors Feroze Khan and Ushna Shah in lead roles – follows the story of a loving couple “trying to make it through the misunderstandings that are created by the unfortunate circumstances and the people around them.” Tessa essays Zoya in the show, the youngest sister of lead protagonist Ayesha (Shah). The rest of the cast includes Ayesha Omar, Saba Faisal, Dania Enwer, Hina Rizvi, Isra Ghazal, Javed Sheikh, and Imran Aslam.