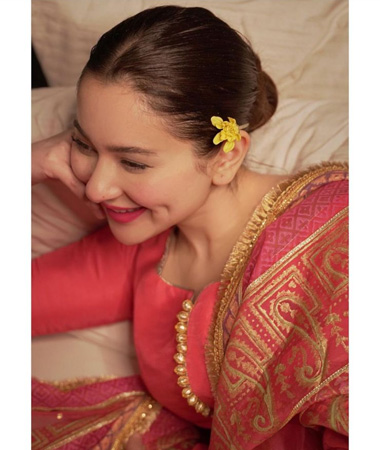 Actor Hania Aamir flaunted elegance in her latest picture which is going viral on social media. In the viral picture on the visual-sharing platform Instagram, the Mere Humsafar actor was smiling in a stylish red-coloured outfit. Millions of the social media application’s users liked the picture.

With over five million Instagram followers, Hania Aamir is one of the most popular Pakistani celebrities on the picture and video-sharing platform. She leaves fans in awe with visuals of her and work.

Earlier, she shared a picture of her with Farhan Saeed from the sets of drama Mere Humsafar.

Hania Aamir’s looks get compared with that of Bollywood actor Alia Bhatt. The Ishqiya star, addressing the comparison, said Brahmastra: Part One – Shiva actor is a megastar and feels happy when she gets compared to her. The celebrity is currently seen in Mere Humsafar where she plays the role of Hala. Moreover, her performances in Ishqiya and Visaal earned praise from audience and critics.