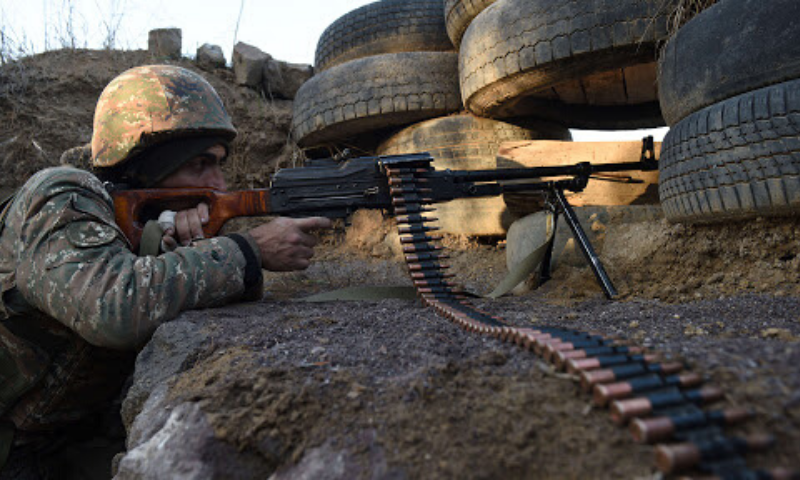 Armenia said on Tuesday that at least 49 of its soldiers had been killed in clashes along the border with Azerbaijan after a sharp escalation in hostilities which prompted Russia and the United States to call for restraint.

The escalation of decades-old hostilities between the south Caucasus countries has fuelled fears that a second fully-fledged war could break out in the post-Soviet world in addition to Russia’s invasion of Ukraine.

Armenia said several towns near the border with Azerbaijan, including Jermuk, Goris and Kapan, were being shelled in the early hours of Tuesday, and that it had responded to what it called a “large-scale provocation” by Azerbaijan.

Baku said it was attacked by Armenia.

Armenian Prime Minister Nikol Pashinyan accused Azerbaijan of attacking Armenian towns because it did not want to negotiate over the status of Nagorno-Karabakh, an enclave that is inside Azerbaijan but mainly populated by ethnic Armenians.

“The intensity of hostilities has decreased but attacks on one or two fronts from Azerbaijan continue,” Pashinyan said in a speech to parliament, according to Russian media.

Azerbaijan, which accused Armenia of carrying out intelligence activity along the border and moving weapons, said its military positions came under attack by Armenia. Azeri media reported that a ceasefire agreement had been broken almost immediately after being enforced early on Tuesday.

Both Russia and the United States called on Baku and Yerevan to observe restraint.

“As we have long made clear, there can be no military solution to the conflict,” US Secretary of State Antony Blinken said in a statement. “We urge an end to any military hostilities immediately.”

The Russian foreign ministry said in a statement that the conflict between Armenia and Azerbaijan “should be resolved exclusively through political and diplomatic means”.

Russia, which operates a military base in Armenia, sent thousands of peacekeepers to the region in 2020 as part of a deal to end six weeks of hostilities during which Azerbaijan make significant territorial gains in and around Nagorno-Karabakh.

Moscow is a key power broker in the region and an ally of Yerevan through the Moscow-led Collective Security Treaty Organization (CSTO), which convened on Tuesday to discuss the situation. Turkey backs Azerbaijan.

The defence ministers of Armenia and Russia spoke on Tuesday morning and agreed to take steps to stabilise the situation on the border. Turkish Foreign Minister Mevlut Cavusoglu talked to his Azeri counterpart Jeyhun Bayramov and called for Armenia to “cease its provocations”.

Michel met with Pashinyan and Azerbaijani President Ilham Aliyev last month in Brussels for talks on the normalisation of ties between the countries, humanitarian issues and the prospect of a peace treaty over Nagorno-Karabakh.