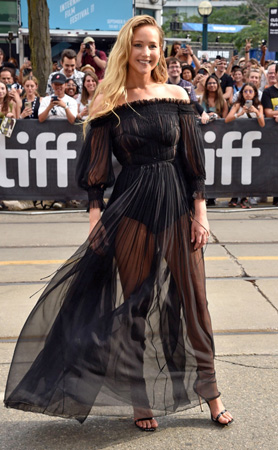 Jennifer Lawrence is back rocking the red carpet, this time as a mom. The Oscar winner showcased a glamorous look at the premiere of her latest film, Causeway, at the Toronto International Film Festival on Sept. 10. Lawrence wore a strapless black Dior Haute Couture’s fall 2022 gown with a ruffled, off-the-shoulder neckline and sheer overlay. The premiere marked the actress’ first red carpet event since giving birth to her and husband Cooke Maroney’s first child early this year. Lawrence, who has been photographed out in public several times since welcoming her baby boy, recently revealed the infant’s name-Cy-in a Vogue interview. She and her husband named their son post-war American painter Cy Twombly, one of Maroney’s favourite artists. In the interview, Lawrence also gushed about motherhood. “I mean the euphoria of Cy is just-Jesus, it’s impossible,” she told the outlet. “I always tell him, ‘I love you so much it’s impossible.'”