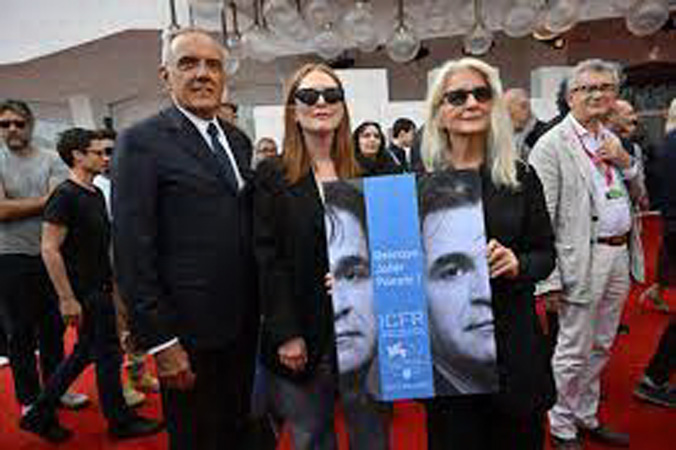 Julianne Moore led a flash-mob protest on the Venice red carpet on Friday in support of filmmakers detained around the world, as the festival premiered the new movie from imprisoned Iranian director Jafar Panahi.

Panahi, who won the top prize Golden Lion in Venice in 2000, was jailed in July along with two other filmmakers in the latest crackdown on Iranian civil society.

Moore, who is leading the jury at this year s festival, was joined for the protest by dozens of other artists, including British director Sally Potter and last year s Golden Lion winner, France s Audrey Diwan.

They held posters that also highlighted the detention of Myanmar filmmaker Ma Aeint and Turkish producer Cigdem Mater. Despite years of attempts to silence him, Panahi s new film “No Bears” shows that he has lost none of his searing political critique and wry sense of humour.

The film is partly focused on Iranians in Turkey, trying desperately to emigrate to Europe.

But it also follows Panahi himself in a fictionalised version of his real life, as he struggles to make the film from across the border in Iran, which he was already banned from leaving. One of the film s stars, Mina Kavani, told reporters in Venice she was inspired by his focus, despite having to direct by phone and internet. “He was in such concentration, he had such perfectionism — as an actress, I couldn t let myself get sentimental,” said Kavani, who lives in exile in France. “All that counted for him was cinema. He just wanted to make his movie. I thought: I know now why he s Mr Panahi. ”

Survival — in 2010, Panahi was sentenced to six years in prison for “propaganda against the system” following his support for anti-government protests. As can often happen in Iran, the sentence was never carried out but hung over him — and was only enacted in July when he went to enquire about two other filmmakers, Mohammad Rasoulof and Mostafa Aleahmad, who had just been arrested. Panahi and Rasoulof issued a defiant statement via the Venice organisers last week, vowing to continue making art.”The history of Iranian cinema witnesses the constant and active presence of independent directors who have struggled to push back censorship and to ensure the survival of this art,” they wrote. Panahi has won the top prizes in Venice and Berlin (2015 s “Taxi”), as well as best screenplay at Cannes — but was unable to accept either of the last two prizes in person. The crackdown on civil society has worsened even further under President Ebrahim Raisi, an ultra-conservative former judiciary chief who came to power last year. Yet Iran s independent filmmakers continue to punch above their weight, in spite of the pressure. A second Iranian film is competing for the Golden Lion this week — “Beyond the Walls” by Vahid Jalivand — a grim look at Iran s security state and those trapped within it. Jalivand was cautious in his words at a press conference on Thursday, saying “a balance between the two sides” was needed in Iran today.

“In this movie the hero of the movie is a security official himself. We have unfortunately reached a perspective where it is totally bipolar,” he told reporters.