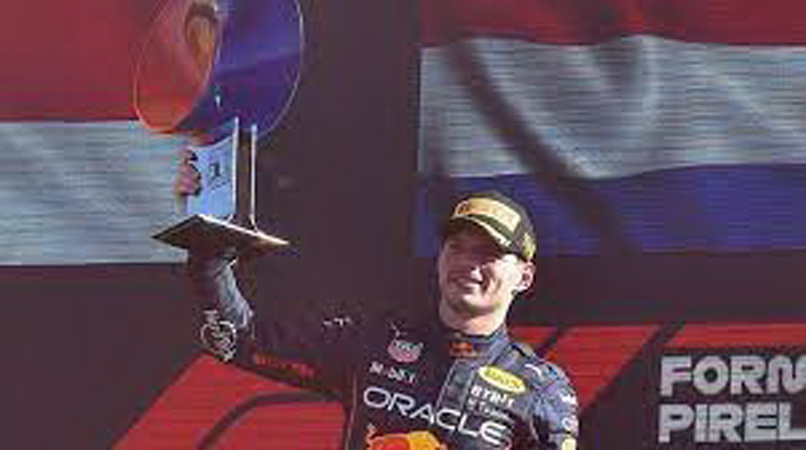 MONZA: Max Verstappen won the Formula One Italian Grand Prix on Sunday to leave him in touching distance of his second straight Formula One title. Championship leader Verstappen claimed his first win, or podium finish, at Monza after fighting from seventh on the grid to beat Charles Leclerc over the line on another difficult day for Ferrari. The Red Bull driver is 116 points ahead of Leclerc in the drivers’ standings after winning a race whose final six laps were run with the safety car after Daniel Ricciardo slid off the track. With six races left, Verstappen can win the driver’s crown at next month’s Singapore GP. The Monza crowd booed and whistled loudly as the cars came over the line as they were denied the chance to see their man Leclerc try to overtake dominant Verstappen, who won his fifth GP in a row.

George Russell of Mercedes rounded off the podium. Leclerc’s teammate Carlos Sainz surged from 18th on the starting grid to fourth. Leclerc started on pole and held off an early overtake attempt from Russell to keep first place while Verstappen was already bursting through the pack. Having started in seventh, Verstappen shifted up four places by the end of the first lap. He moved ahead of Russell on lap five to put Leclerc in his sights. Verstappen took the lead on lap 13 when Leclerc pitted to change from soft to medium tyres after a virtual safety car was introduced when Sebastian Vettel crashed out.

Leclerc re-entered the track with no major mishaps unlike at last week’s Dutch GP but Ferrari’s decision to pit early would eventually cost them the race. Verstappen pitted on lap 26 to change from his softs to mediums and rejoined the fray just behind Leclerc with the same compound in which his Ferrari rival had already driven around the track 13 times. That tyre wear made the difference when Leclerc handed Verstappen the win by pitting again to go back to softs seven laps later. Daniel Ricciardo’s race ended with six laps remaining and with his car stuck beside the track that allowed everyone to pit knowing a safety car would come out. What they didn’t know was that the car would remain on the track until the end of the race, meaning Verstappen strolled over the line for a victory which would likely have come regardless.