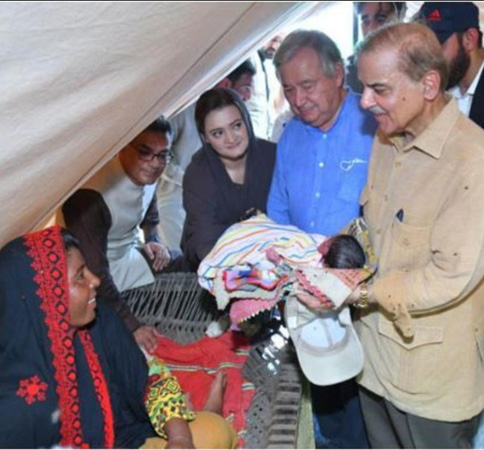 “It is not a matter of generosity, but a matter of justice,” he said reiterating the UN’s commitment, strong support and solidarity with the flood-affected populace of Pakistan.

Guterres said that huge damages and losses were caused to human lives and properties. The UN absolutely supported the Pakistani nation and requested the well-resourced nations to support the country massively, so that it could face the future challenges of climatic changes and save its nation.

He stressed that the international community must realize the serious impacts of greenhouse emissions as nature was striking back in the form of natural calamities.

The issue of greenhouse gases had accelerated the climatic changes and the nations having larger greenhouse emissions footprints must understand these issues, he added.

According to the scientific estimates, the UN secretary-general emphasized that now, it was a time to reduce greenhouse emissions.

He said it was also a fact that they were living in a climatic changing era and have to make efforts to rebuild communities and to enable the countries to resist and face the future disasters that could be wrought by the natural calamities.

On the occasion, the prime minister while speaking to the UN secretary-general, said that the relevant authorities faced huge difficulties to reach to the affected people in the remote areas of the province. He informed that floods had badly affected the road and rail infrastructure besides, damaging bridges. The prime minister said that the rehabilitation of the flood affectees was a major challenge, the federal government was assisting the provinces and urged the international community’s support to overcome these challenges. He said that the province had its natural resources and his government was focusing on the development of the province.