* PTI chief condemns PML-N for asking judiciary to take action against him over 'contempt' while their own leaders attacked SC in past
* Judiciary should be independent to protect people's rights
* Military dictator participated in US war, sacrificed 80,000 Pakistanis 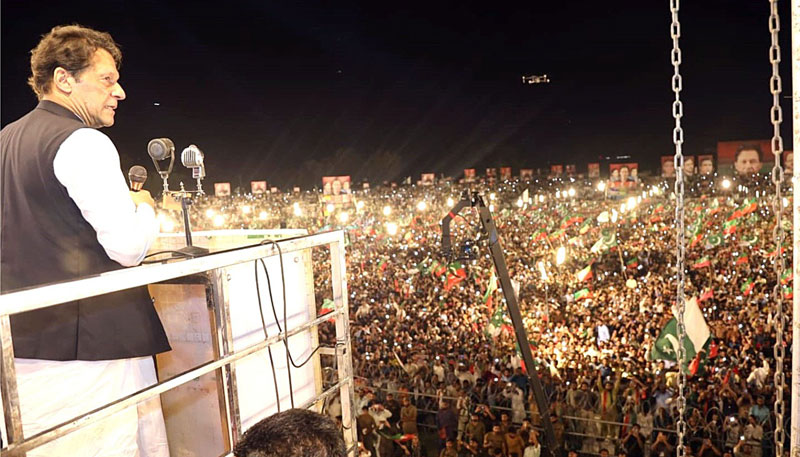 PTI chief Imran Khan Friday warned the coalition government that his freedom movement will march on Islamabad if the political victimization of his party continued.

“I am warning you today, our justice movement will come to Islamabad if you continue to do this and you will have nowhere to hide,” he thundered while addressing a public gathering in Gujrat.

He lambasted the government for its alleged use of force against the PTI leader Shahbaz Gill, saying he was stripped naked and tortured. “They also tortured Jameel Farooqui. Stripped him naked and humiliate him as well. Haleem Adil also has many cases against him. He is also being tortured in prison,” he lamented.

Addressing the youth, he said together they need to work to make the judicial system of the country better.

“You all have to come with me for that.”

“When I started my journey 26 years ago, we said the judiciary should be independent so it will protect the rights of the people. I was the only political leader who was put behind bars during the judicial movement. We boycotted 2008 elections for the judiciary.”

He condemned the PML-N for asking the judiciary to take action against him, saying that the same party, on the instructions of former prime minister Nawaz Sharif, attacked the Supreme Court with clubs.

“They should be ashamed of themselves while making this demand. The PML-N should never say anything about my contempt case,” he added. Imran said former chief justice Sajjad Ali Shah was removed after money was used by the PML-N. “If the judiciary is not strong, who will protect rights of the people,” he questioned. He said that the “imported government” was imposed upon the nation via a foreign conspiracy. “They did not want Imran Khan because he was saying “absolutely not”. He was making a foreign policy for the people of Pakistan,” he added. He said if Russia was giving his government oil at 30 to 40 percent cheaper rates, why should he not buy it as it is better for the people?

“India also taking oil from Russia on 40 percent cheap rates… why can’t we,” he raised a question. The ousted premier said a military dictator participated in the US war and sacrificed 80,000 Pakistanis. “They will take the orders from their masters abroad. They will never take cheap oil from Russia because the US will get annoyed. I fear they will get us into another conflict.” When the PTI was in power, he went on to say, the opposition’s campaign against the government was based on rising inflation. However, during their own tenure, inflation has now reached record levels. 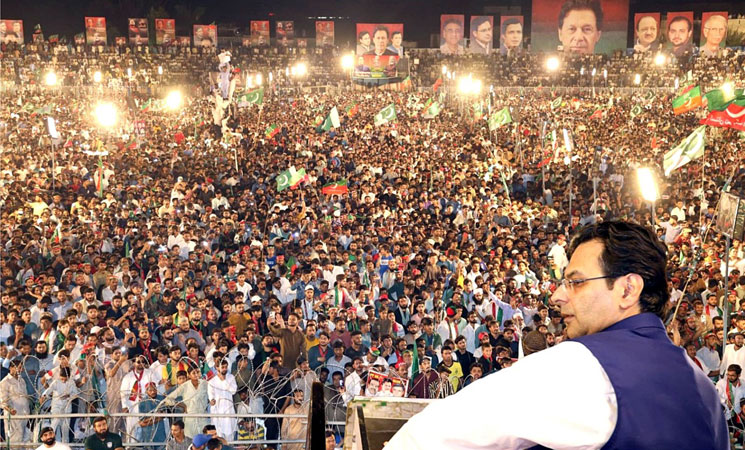 “Bilawal came to Islamabad and said Imran Khan ki kanpen tangengi… For God’s sake improve your Urdu first,” he said and added that the entire opposition of that time used to say the government had become a slave of the IMF. Imran said that petrol was priced at Rs150 per litre while diesel was available for Rs145 during PTI’s tenure despite being in the IMF programme, adding that petrol price was raised by Rs80 and diesel by Rs100 in only four months.”Now, when we ask they say the prices are increasing because of the IMF. We were also in the IMF programme. SPI in our tenure was 17 to 18 per cent. Today it is 45 per cent. More than three times. What happened during these four months,” he said.

PTI chief said that oil in the international market during his tenure was $103 to $110 and today it was $96 but the government has not passed on the relief to the masses. “During our tenure electricity was Rs18 per unit and we had even subsidised Rs5 per unit. Today, it is Rs36 and with taxes, it reaches Rs50. They did not come to power to eliminate inflation. They came to close their corruption cases,” he insisted.

The ex-PM also criticised the former president General (retd) Pervez Musharraf for forgiving the political leaders allegedly involved in corruption, saying he did not have the power to do so.

“Corruption hurts the core of a country. When top leadership commits corruption, a country gets destroyed.” Imran also said that the entire nation was with flood victims. “Entire Pakistan is submerged in flood water. I will unite the nation and also gather funds. We collected Rs5 billion. I will collect more funds. We are all with the flood victims. The entire nation is with them.”