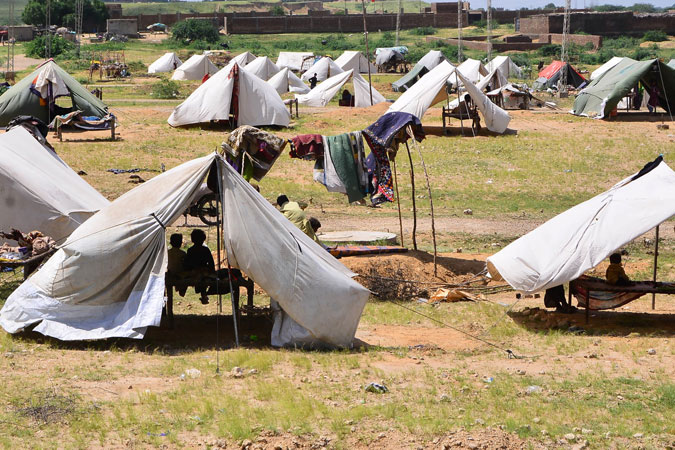 The water level in Dadu continued to rise on Friday as the overall death toll from the devastating floods, which have affected millions across the country, crossed 1,200. The increase in water levels in Dadu is a consequence of a surge in the flow of water down River Indus, with monstrous floods leaving a trail of destruction in the country’s northern regions.

Record monsoon rains and melting glaciers in northern mountains have triggered floods that have killed at least 1,208 people, including 416 children, and injured 6,082, according to the National Disaster Management Authority (NDMA). The latest NDMA report said 19 casualties were reported over the past 24 hours. The Pakistan Army, Rangers and district administration are jointly carrying out the relief work, he said, adding the military and the district administration had also launched a rescue operation in kacha (riverine) areas.

On Thursday, Sindh government spokesperson and Karachi Administrator Murtaza Wahab told Reuters that “we’re on a high alert as water arriving downstream from northern flooding is expected to enter the province over the next few days”. Keeping in view the impending threat, hundreds of families in the province have taken refuge on roads, the only dry land in sight for many. Many are headed for urban centres, like the port city of Karachi, which has for now escaped the flooding. “We lost our house to the rain and floods, we’re going to Karachi to our relatives. No one has come to help us,” Allah Bakash, 50, told Reuters, who left Dadu on Thursday with his family and belongings loaded on a truck. Meanwhile, the Flood Forecasting Division has predicted medium to high level flooding in Indus River (downstream Taunsa) from Sep 4 to Sep 6 due to expected heavy rainfall in the catchment areas. According to daily Federal Flood Commission report on Friday, River Indus was currently flowing in “high flood” in Guddu-Sukkur reaches and in “medium flood” at Taunsa and Kotri.

Flood flows in Kabul River (a tributary of River Indus) at Nowshera have receded considerably where it was flowing in “low flood”. Other main Rivers of Indus River System like Jhelum, Chenab, Ravi and Sutlej continues to flow with normal discharges. As floods ravaged the south, the situation was improving in the country’s north, where water levels were decreasing and officials were preparing to send displaced citizens back to their homes. In a video statement, Special Assistant to the Khyber Pakhtunkhwa (KP) Chief Minister Barrister Mohammad Ali Saif said a high-level meeting was chaired by CM Mahmood Khan where it was decided that people would be facilitated in returning to their homes.

“People have been allowed to leave relief camps and arrangements are being made for tents, beds, edibles and other health facilities,” he said, adding that the provincial government would also send survey teams to flood-hit areas to assess the extent of the damage and prepare a report.