Hania slays in casual glam for the night 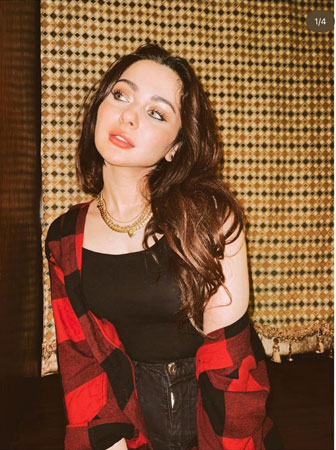 The ‘Mere Humsafar’ star, on her official account on the photo and video sharing application, Wednesday, posted a new picture gallery of herself captioned with a single sticker.

The now-viral picture gallery sees Hania Aamir serve some casual glam look in pair of black denim and tank top, styled with a red-black checkered overshirt. She rounded off the stylish look with a layered necklace, simple watch and doll-like makeup.

The photos garnered close to half a million likes within hours from her 5.9 million followers, in addition to lovely compliments for the actor in the comments section.

Have a look at some of the comments from social users.

Omg this is bomb

On the professional front, Aamir is currently receiving acclaim for her performance as Hala in the trending serial ‘Mere Humsafar’.

The family play is one of the top-watched shows of this season, with millions of YouTube views on each of the episodes. The massive fanbase of the serial is not limited to Pakistan, as it also a top trending Pakistani drama in multiple countries including India, Bangladesh and Nepal. Written by Saira Raza and helmed by Qasim Ali Mureed, ‘Mere Humsafar’ features an ensemble supporting cast to lead pair, Farhan Saeed and Aamir, with the likes of Samina Ahmed, Saba Hameed, Waseem Abbas, Hira Khan, Zoya Nasir, Omer Shahzad, Tara Mehmood and Aly Khan. ‘Mere Humsafar’ airs in prime time every Thursday on ARY Digital.