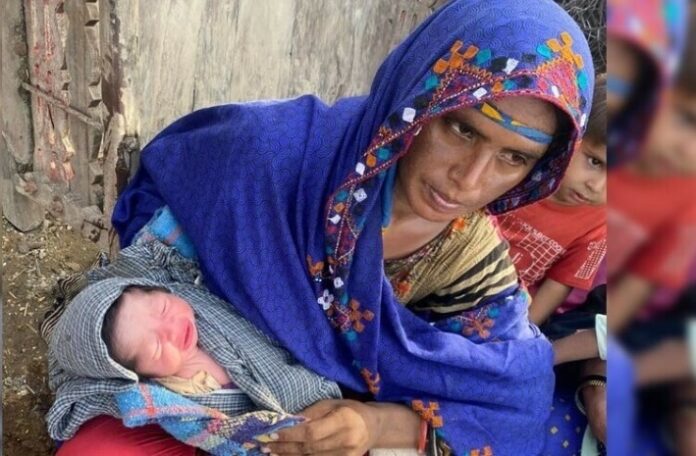 Powerful floods caused by the country’s heavy rains that started in June have damaged or destroyed more than a million homes and washed away vast areas of crucial crops.

With the possibility of additional flooding hitting parts of the country in the coming days, especially Sindh, hundreds of thousands of displaced people urgently require shelter, food, and clean water.

Given that over 400 people have died in the province since June of this year, Sindh has been severely affected by the devastating floods. Floods from swollen rivers are headed for low-lying areas, endangering millions of people in the second-largest province of Pakistan with additional misery.

In one of the flood relief camps, a woman from the district of Larkana who is one of the displaced families gave birth to a baby. The newborn boy was given the name “Sailab Khan” [flood] by his father, who told the media that he was born in the Larkana neighborhood that had been affected by the floods. He lamented that the provincial government had done nothing to assist those affected by the flood.

One of Sindh’s worst-affected regions is the Larkana district. All of the region’s infrastructure was destroyed by flash floods. According to locals, their homes and possessions were washed away along with their crops and animals.

All those who are making their efforts in relief work. AP sab ko Salam!

Inshallah we will be out of this soon! #PakistanFloods pic.twitter.com/MUJ3Qaaon3