Pakistan’s Omar Khalid bounces back with 75 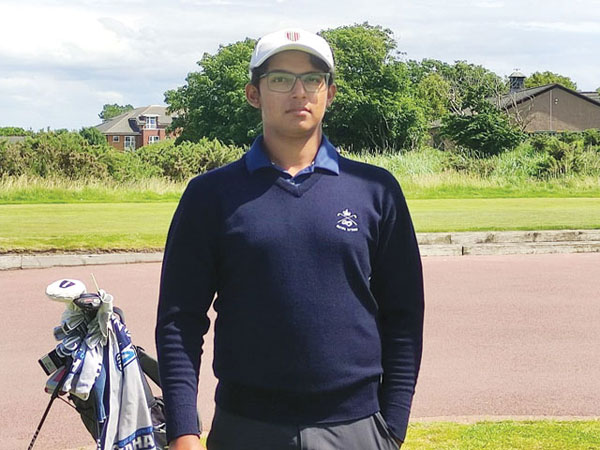 KARACHI: Pakistan No.1 Omar Khalid bounced back from a disappointing first round to card a respectable score of 75 in the 32nd World Amateur Team Golf Championship at the prestigious Le Golf National in Paris on Thursday morning. On a day when his team-mates Salman Jehangir and Yashal Shah flopped in the second round of the 72-hole championship, Omar made three birdies on a pleasant morning to make amends for his opening round card of 85 at the par-72 Golf de Saint-Nom-La-Bretèche course on Wednesday evening. Yashal, who carded 76 in the opening round at Golf de Saint-Nom-La-Bretèche faltered in the second round scoring 15-over par 86 at the par-71 Le Golf National. Lahore’s Salman, the most experienced player in Pakistan’s three-member team, followed his opening day’s 84 with a disappointing 86 in the second round. Omar, 18, was in top gear in the second round at Le Golf National, counted among the toughest championship courses in the world, as he made birdies on holes 3, 14 and 16 to improve his position on the leaderboard with an aggregate of 160. Yashal is two shots behind him at 162 followed by Salman at 170. “I had a bad outing on the first day but thankfully things were better today,” Omar said. “Hopefully we will do better in the next two rounds.”

Meanwhile, Japan, with Taiga Semikawa shooting nine-under 63, distanced itself from a tightly packed leaderboard with a 14-under-par to take a six-stroke lead over Spain in the first round of the Championship on Wednesday. “I know this is the world’s biggest stage, the biggest stage on the planet,” Semikawa said. “I am stunned. I really trust my teammates. I didn’t feel any stress today. I felt comfortable and is why I had such a low score.” Austria, Germany, Italy, Sweden, Switzerland and the host nation France share third place, seven strokes behind Japan, while Australia opened with a five-under score from the combination of Harrison Crowe and Hayden Hopewell to sit in a share of 11th.

Playing in the afternoon at Golf de Saint-Nom-La-Bretèche, 2022 Japan Amateur Champion Kohei Okada shot a five-under 67 with six birdies and Taiga Semikawa, fuelled by a six-under front nine, had 10 birdies to pass the morning wave leaders. Keita Nakajima, the two-time Mark H. McCormack medal winner as the No.1 player in the World Amateur Golf Ranking, shot a non-counting 72. Also at Golf de Saint-Nom-La-Bretèche, Spain’s David Puig shot a six-under 66 and Josele Ballester added a two-under 70. Germany’s Jonas Baumgartner, who plays at Oklahoma State University, notched nine birdies enroute to a six-under 65 and teammate Anton Albers shot one-under 70 at Le Golf National. France, vying to become the first host country to win since the USA at Pinehurst No.2 in 1980, posted a four-under 67 from Martin Couvra and a three-under 68 from Julien Sale. Austria used the combination of Christoph Bleier (68) and Maximilian Steinlechner (69) for their share of third. Bleier recorded an eagle and six birdies in his round. Italy, with Open Championship low amateur Philippo Celli shooting 67 and Marco Florioli shooting 68; Sweden, led by Tobias Johnsson’s 67 and Switzerland, led by Cedric Gugler’s 66, were the other teams in third. The USA and England share ninth place. A pair of three-under 68s by Austin Greaser and Michael Thorbjornsen accounted for the American score and England received the same scores from Sam Bairstow and John Gough. Conducted by the International Golf Federation (IGF), the World Amateur Team Championships are a biennial international amateur golf competition. The women compete for the Espirito Santo Trophy and the men compete for the Eisenhower Trophy.