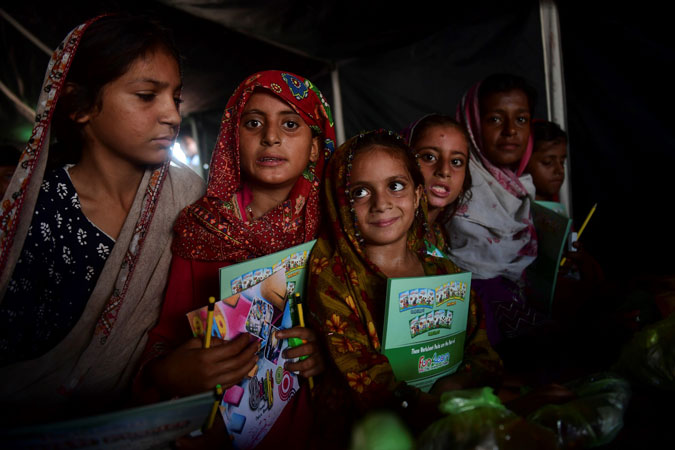 At least 18,590 schools have been damaged or destroyed in floods sweeping across Pakistan, with initial estimates that at least 670,000 children have been affected although the real number could be much higher, said Save the Children. With whole villages underwater and rain continuing to fall, thousands of students across the country who had been preparing for the start of the academic year have found their schools completely submerged, with books, blackboards, chairs and tables floating downstream. In the worst impacted region, Sindh province, nearly 16,000 schools have been damaged or destroyed. In addition, around 5,500 schools are being used to house children and families displaced by the floods, which have engulfed a third of the country impacting at least 14% of the population and overwhelming emergency services. Pakistan has experienced extreme monsoon weather since June 2022, with rainfall 67% above normal levels in that month alone.

The government has described the situation as a “climate catastrophe of unimaginable proportions” affecting more than 33 million people including 11 million children.

Nearly 400 children have been killed and a further 550 injured in the disaster, as houses collapsed around them, or they have been washed away in floodwaters, along with over 3,800 adults killed and injured.

Khuram Gondal, Save the Children’s Pakistan Country Director, said: “The scale of the damage we are seeing will prevent thousands of children from going back to school any time soon. We’ve seen entire buildings completely washed away. Children, already battling the shock and horror of what’s happening around them, now also have to cope with the loss of their classrooms and their safe place to learn. We know from experience that it takes time to repair schools, and many of these children have already missed months of education already because of COVID-19.

“We are calling on donors around the world to recognise the terrible situation in Pakistan and dig deep to help children. Beyond immediate life-saving supplies like shelters, food and water, we also need to establish emergency schools where children can go, be safe, and learn. Schools are vital for both children’s future and their current wellbeing – they are cherished environments and offer routine and stability amidst chaos.”

The floods and torrential rains are being blamed on worsening weather patterns as a result of the climate crisis, with Pakistan ranked as one of the most vulnerable countries to climate change, while it contributes less than 1% of the global greenhouse gas emissions.

The situation is expected to deteriorate in the coming days and weeks as heavy rains continue in already flooded regions.