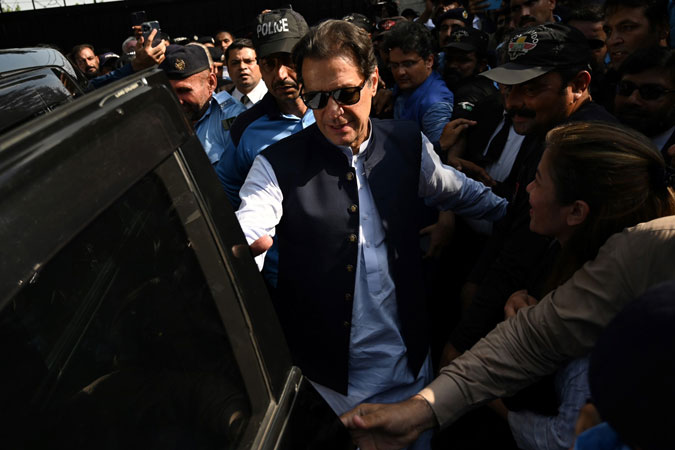 Justice Minallah said, “We have read your written response” before adding that he “did not expect what was stated” about the lower court judges. “I was expecting that the mistake made would have been admitted,” continued the judge. The judge stated that the courts had taken up “sensitive matters” including “torture” and “enforced disappearances”. Justice Minallah remarked that he was saddened by Imran’s reply and the subordinate court referred to therein was “the court of the common man”.

“The common man still doesn’t have access to the Supreme Court or the high court,” he added.

Continuing, the IHC CJ commented: “Time that has passed and words that have been said cannot be taken back.”

Reflecting on the seriousness of contempt against the court, he added that judges responsible for upholding justice in serious matters “were opened to criticism”, particularly when Imran “questioned why the court was opened at midnight”. Justice Minallah was alluding to the PTI chief’s criticism of the IHC being opened at midnight during the vote of no confidence tabled against him in the National Assembly in April this year. “It has been open to everyone since 2018,” he retorted.

“For the past three years we have raised the issue of torture without any fear. A political party’s leader has followers, they should think before they speak.” Minallah furthered that for three years the court raised issues with the then federal cabinet but “if only they [the former ruling party] had raised their voices then as well”.

“Should someone of Imran Khan’s stature have done this?” said the IHC CJ as he lambasted the PTI chief for not having repented over his words. “No one can influence this court or any judge,” he added while saying “this court has to uphold civilian supremacy. These [lower court] judges are more important than the Supreme Court and high courts.” “Change will come when the constitution will be supreme and civilian supremacy will be upheld,” remarked the judge.

Advocate General Islamabad (AGI) Jahangir Jadoon began to argue that PTI leader Fawad Chaudhry had also given statements against the court. Imran’s lawyer, however, distanced himself from Fawad’s comments. Preventing the AGI from speaking, the court maintained that “the matter is between the court and the one against whom the contempt was committed”. “You are registering sedition and terrorism cases,” the judge lambasted and suggested the “approach should be reviewed”. Subsequently, the IHC appointed senior lawyer Makhdoom Ali Khan, Muneer A Malik, and the Pakistan Bar Council member as amici in the case.

“Please do appreciate the gravity of this matter,” said CJ Minallah as he adjourned the court until September 8 and directed Imran to submit another response. Strict security in place As Imran entered the court premises alone, journalists inquired if he would apologise for his remarks to which he responded “I have submitted my response to the court”.

He also remarked “I wonder why there is so much fear,” in a casual conversation with the media before party Vice President Shah Mehmood Qureshi prevented journalists from further questioning. Police sources confirmed that a bomb disposal squad was tasked with clearing the courtroom, while all attendees were ordered to empty the premises before Imran’s arrival. PTI leader Babar Awan had initially refused to leave the room. “I will not leave the courtroom,” said Awan while Hamid Khan was stopped outside the room by security personnel. However, Babar Awan and his son were ultimately expelled from the courtroom for not being named in the cause list, while Imran’s legal team was permitted inside.

PTI leader Azam Swati and AGI along with the additional attorney general and advocate general were also allowed to enter the courtroom.

As per the security orders issued by the government in the morning, only lawyers on the cause list were allowed to enter the high court after security checks, and the court was secured by barbed wire. While SSP Operations Jameel Zafar was assigned the primary responsibility of ensuring security outside the high court, three superintendents of police (SP), and nine additional and deputy SPs were providing their services in the court’s vicinity. Additionally, at least a thousand junior rank officers and officials were posted around the IHC, while the Security Division was responsible for providing security inside the court premises.

The security order also stated that Safe City cameras will be used to scan the area and that all officers and personnel posted on the ground will be unarmed barring those that have been assigned rooftop duties.