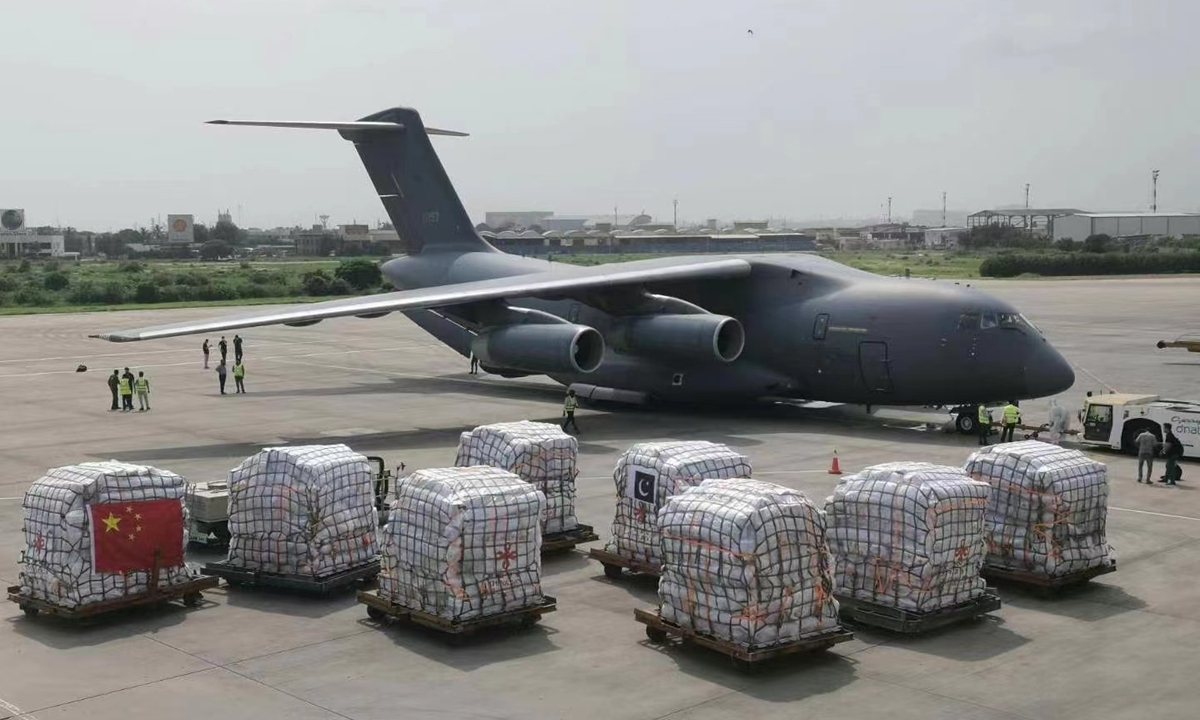 The observers said the solid friendship between China and Pakistan sets a good example for countries of different political systems and development levels to foster a time-tested friendship, regardless of how the international political landscape changes.

In an exclusive interview with the Global Times, Ambassador Haque said he was extremely grateful to China for being among the first countries to announce disaster relief support to Pakistan.

He said he had seen a continuous outpouring of sympathy and support from different sections of Chinese society after the unprecedented, climate-induced natural disaster.

“This exemplifies the longstanding tradition of sharing weal and woe between our two countries and two brothers. The people of Pakistan are indeed touched by this generosity and goodwill,” Haque said.

Delivery of tents by PLA aircraft will offer great assistance to those whose houses have been washed away in the floods, according to Haque.

Haque said that there has been widespread destruction of infrastructure, crops and livestock. At this stage, the focus is to provide shelter, food and essential medicines to the affected people.

On a flight to Karachi, a Global Times reporter saw large areas of northern Sindh province were still submerged, with only the roofs of some houses visible.

A health expert said that it was necessary to undertake the timely prevention and treatment of infectious diseases such as cholera and malaria in the aftermath of the floods, to avoid more serious health problems.

Chinese communities and enterprises inside and outside of Pakistan also provided the best they could offer to the disaster-hit country.

In response to calls from the Chinese Embassy and the arrangement of the Chinese business chamber, China State Construction has donated 600,000 Pakistani rupees, and another Chinese company in Pakistan, Henan D.R. Construction Group, donated cash and materials to those in need, the Global Times learned from those companies.

An employee from Power Construction Corp of China, a Beijing-based major infrastructure project builder, informed that the company is preparing donations of goods and funds, while providing assistance to local Pakistani employees who have been affected by the disaster.

The friendship between China and Pakistan has come more solid as time passed, and it continued to develop no matter how international political conditions changed, setting a good example for countries of different systems and different development levels to develop a friendship, Qian Feng, director of the research department at the National Strategy Institute at Tsinghua University said.

The friendship is not only reflected in the bilateral relationship but is also deeply rooted in the hearts of the people of both countries, who help each other whenever there are difficult times, Qian noted.