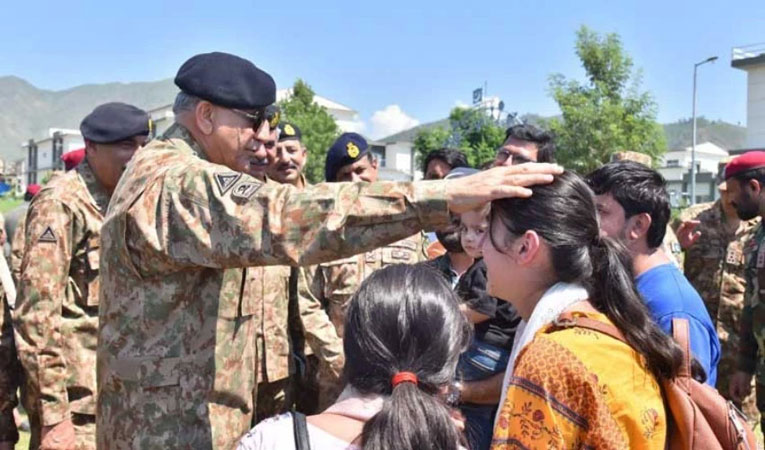 Chief of Army Staff (COAS) General Qamar Bajwa has said that the scale of devastation from floods is ‘massive’ especially in Sindh and urged international assistance to overcome challenges in an aftermath of floods.

COAS Bajwa vowed to rebuild prefab houses for the flood affectees as he and other army officials met with the flood survivors in Swat in Khyber Pakhtunkhwa (KP).

The women, children, and other people were rescued by the army aviation helicopters today from Kalam to Kanju areas of Swat.

Talking to the reporters, he said that the National Flood Response Center would operate on the lines of NCOC. The center would compile data from across the country and coordinate efforts for the rehabilitation of the affectees, he added.

He said that Sindh and Balochistan have been hit the hardest in this year’s floods and there was a dire need for tents there. The water is standing up to four feet in Sindh and dozens of villages have been wiped out in Balochistan, COAS Bajwa said.

He added that like 2010, many bridges and hotels have been destroyed in KP and emphasized action against those who allowed their reconstruction on locations vulnerable to flood.

The army chief said the evacuation efforts in Kalam were underway.

He said that the most important thing is to open Kalam road. The army chief vowed to open it in a week instead of stipulated time of two weeks. COAS Bajwa said that the rescue and relief efforts would be completed soon but the real challenge is rehabilitation of flood survivors. He also hailed the response of compatriots and said tons of ration was being collected.