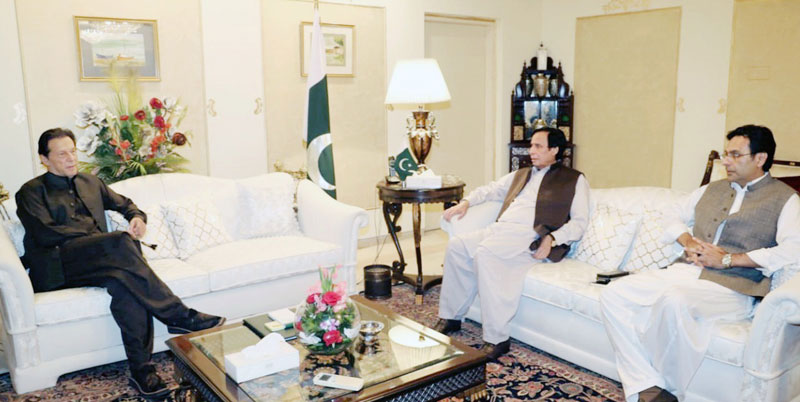 Chief Minister Punjab Chaudhry Parvez Elahi and former federal minister Moonis Elahi met chairman PTI Imran Khan and discussed matters of mutual interest as well as the prevailing political situation. They also congratulated Imran Khan on the successful holding of the telethon while the CM apprised Imran Khan of the flood victims’ rehabilitation plan, adding that he salutes the spirit of the nation, especially the expatriate Pakistanis. The nation has responded to the call of Imran Khan and the successful outcome proves that people have unwavering faith in the leadership of Imran Khan, he noted.

Imran Khan is the son of the soil, who has come up to the expectations of the nation. It is sanguine that Imran Khan took the initiative to collect funds for the rehabilitation of people in need. Imran Khan’s intention is good and his direction is right; he asserted and observed that Allah Almighty also gives the fruit of good intentions. Imran Khan’s success is the victory of Pakistan; he noted and vowed that the government was committed to early rehabilitating the affectees. The government was standing with the flood victims and we will not allow any shortage of resources for the affectees, concluded the CM.

The water level in the River Satluj could affect residents of Sahuka, Jamleera, Farooqabad, Head Islam, Suldaira, Budh Ghulam, Mauza Akbar, and Mauza Saifen. The deputy commissioner instructed the residents to should keep their luggage ready so that they should be shifted to safer places in case of emergency situation.

He said that the recent flood has affected all Tehsils of Dera Ghazi Khan while Taunsa Sharif and Rajanpur district has also been affected. He said that all possible efforts were being made to ensure maximum relief for flood hit people. He said that clean drinking water, food, shelter and medicines were being provided to the people of flood hit areas.

Secretary Housing added that 36,000 food packets, 13,000 tents and 2400 cooked cauldrons have been distributed among flood hit people so far. He urged people to contribute in relief activities in order to bring more improvement in the relief being provided to the people.