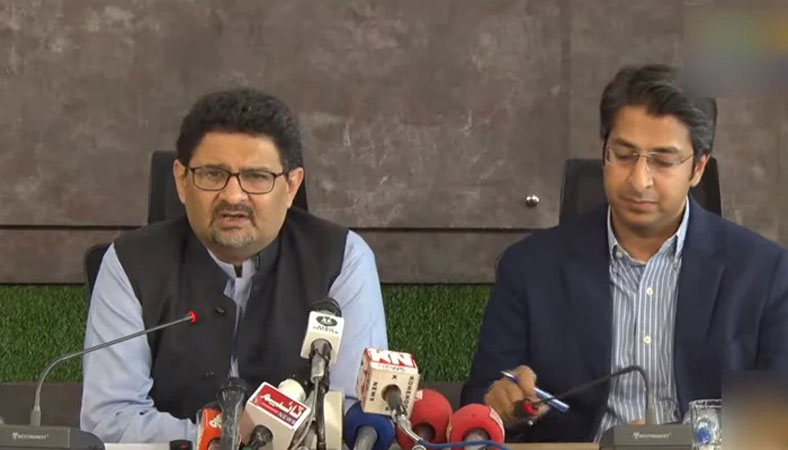 Finance Minister Miftah Ismail Monday lambasted the PTI leadership after Shaukat Tarin allegedly asked Punjab and Khyber Pakhtunkhwa to withdraw from the International Monetary Fund’s (IMF) deal. The revelations came to the fore in an audio leak Monday where the ex-finance minister could be heard directing Punjab Finance Minister Mohsin Leghari and Khyber Pakhtunkhwa Finance Minister Taimur Khan Jhagra to cite recent floods as a core reason for withdrawing from the deal. The KP government – which is completely under PTI’s control – has already written the letter, but Punjab – which PTI rules in coalition with PML-Q – is yet to write it.

In a press conference after the leaked audio surfaced, Mifath said at this time, Pakistan is drowning and the only hope after God is the international money lender. “Shaukat Tarin is the architect behind PTI’s move. Is Imran Khan so power-hungry that he will do anything to get back? Is Imran Khan bigger than Pakistan?” “Should we rename Pakistan to Bani Gala? Have they no shame? How can they stoop so low?” the finance minister questioned.

Referring to the current floods devastating the country, Miftah said Pakistan was “drowning and the one support after God is the IMF programme”. He highlighted, however, that amid the ruin, the PTI had resorted to a “below-the-belt act”. Miftah said the KP finance minister had told him that he had not sent the letter – in which he pulled out from the IMF deal – to the lender. “Have some shame […] I verified it, the letter was sent to the IMF.” The finance minister said the coalition government took tough steps, but it was all to save the country from default. “Some PML-N leaders – including Shahid Khaqan Abbasi and Nawaz Sharif – were against coming into power.” “You have crossed all lines this time,” he told the PTI. He asked Khyber Pakhtunkhwa Finance Minister Taimur Khan Jhagra to resign and PTI Senator Shaukat Tarin to quit politics for trying to sabotage Pakistan’s interests after audio leaks of their conversation regarding the resumption of the crucial International Monetary Fund (IMF) programme surfaced on Monday.

In the leaked audio, Tarin can be heard asking Leghari to tell the lender that the commitment Punjab made was pre-floods and now the province “cannot honour it”. “You have signed a Rs750 billion [surplus] commitment with the IMF. You now need to tell them that the commitment you made was before the floods, and now [Punjab] has to spend a lot of funds for [the] floods [rehabilitation].” “You need to say now that ‘we will not be able to honour our commitment’,” Tarin said, telling Leghari that this is all he wants – for pressure to increase on the incumbent government.

The PTI leader told the finance minister to draft a letter and send it to him for vetting so it could be sent to the federal government and later on to the IMF representative in Pakistan. At Tarin’s request, Leghari asked whether Pakistan would suffer if Punjab – the largest province of Pakistan – withdraws from the deal. “Well, frankly isn’t the state already suffering because of the way they are treating your chairman [Khan] and everybody else? IMF will definitely ask them: where will you get the money from now?” Tarin responded. Tarin said that this could not go on further and the party could not bear being “mistreated” and not respond. “We cannot be blackmailed,” the PTI leader said. In another leaked audio, Tarin can be heard asking Khyber Pakhtunkhwa Finance Minister Taimur Khan Jhagra if he had written the letter. “I am on the way.