Hamilton, Alonso back off in war of words over Spa crash 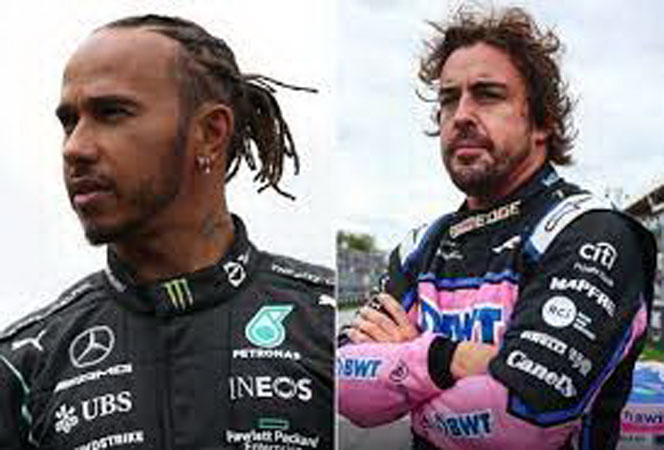 SPA-FRANCORCHAMPS: Lewis Hamilton and Fernando Alonso eased off to avoid a prolonged war of words on Monday following their acrimonious collision in Sunday’s Belgian Grand Prix. Mercedes’ seven-time world champion and his one-time McLaren team-mate crashed on the opening lap with Hamilton forced to retire after an airborne ride over his rival’s Alpine car. In the heat of the moment the veteran Spaniard blasted the British driver as “an idiot”. Hamilton revisited the incident on social media, writing: “First I want to apologise to my fans and especially those who came out to support me. “After almost 30 years of racing, the feeling left from a mistake cuts just as deep as the first. “My team, who work so hard, deserved more.”

Alonso, 41, was also more composed in his comments after the race and distanced himself from the impact of his original outburst on team radio when he said: “What an idiot! Closing the door from the outside. “I mean, we had a mega-start, but this guy only knows how to drive and start in first.” Hamilton accepted full blame for the collision but was clearly put out by Alonso’s initial fury. He suggested he had intended to speak to the Spaniard until he “heard what he said. I know that’s how things feel in the heat of the moment, but it’s nice to know how he feels about me”. Alonso admitted “I was angry”, adding: “The radio, anyway, when you talk, you talk to your engineer and to your team.

‘Won’t stop pushing’: “It’s a shame that sometimes everything is broadcasted, because if it’s broadcasted, it is what you say now (in the moment), this (right now) is how you behave in the media. “When you’re talking on the radio, it’s only a comment to your team, normally.” “I was frustrated there, for sure,” he continued. “Every time we started in the first couple of rows of the grid there is something going on, unfortunately, and I felt that way. But, you know, it was a normal incident, and unfortunately Lewis had to retire the car after the incident.”

Alonso was seen wagging a finger at Hamilton on lap two before he settled down and finished fifth in the race. The two have had a colourful history since being team-mates at McLaren in 2007, Hamilton’s rookie season, when they fell out. Alonso left the team after one year of a three-year contract. The crash capped a disappointing weekend for the 37-year-old Hamilton who had qualified 1.8 seconds adrift of pace-setting world champion Max Verstappen who won the race from 14th on the grid, after taking a penalty, for Red Bull. “We’re not where we want to be,” the British driver, still searching for his first win of the season, said.

“But we won’t stop pushing until we get to where we know where we belong. Sometimes this is life, it happens, but it’s not how we fall, it’s how we get up. “I will be working as hard as I can to come back stronger.” Alonso meanwhile also enjoyed poking fun at Ferrari, with whom he experienced strategy errors, notably when bidding to win his third drivers’ title in 2010. Asked about the Italian team’s curious strategy in Belgium, which saw Charles Leclerc finish sixth, he said he was not surprised. “No, not so much. Ferrari has been doing strange things — and that was just another strange thing.”