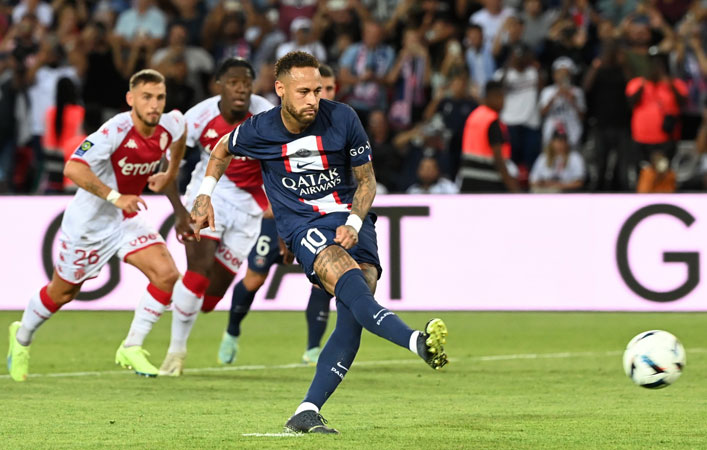 PARIS: Neymar scored from the penalty spot but Paris Saint-Germain’s perfect start to the French campaign was ended in a 1-1 draw with Monaco on Sunday, while Alexis Sanchez scored his first goals for Marseille in a 3-0 win at Nice. In Paris, Neymar rolled in his eighth goal in five matches this season from a penalty awarded when the VAR alerted the on-pitch referee to a foul on the Brazilian by Monaco defender Guillermo Maripan midway through the second half. Monaco had taken the lead when Kevin Volland burst forward, holding off Presnel Kimpembe, before firing past Gianluigi Donnarumma 20 minutes in at the Parc des Princes. The principality side played well, yet PSG deserved at least the draw from a game in which they hit the woodwork three times. Nevertheless, the result does slightly puncture their momentum after a start to the season in which they had won their opening three league games, scoring 17 goals in the process.

They also beat Nantes 4-0 in the season-opening Champions Trophy but Monaco were easily the most accomplished side they had faced yet. “We had difficulties in the first half against a European-level opponent but we deserved to win the game based on our second-half showing,” PSG coach Christophe Galtier told broadcaster Amazon Prime. PSG have 10 points from four games and are top of Ligue 1, but only on goal difference from Lens and Marseille.

Volland silenced the home crowd when he ran through to fire Monaco in front, although that was to be his last involvement as he hurt himself while shooting. PSG were denied an equaliser right on the stroke of half-time in remarkable fashion, as Lionel Messi smashed a long-range shot off the left-hand post, before Kylian Mbappe hit the opposite upright from the rebound. Monaco were also grateful to goalkeeper Alexander Nuebel for saving from Neymar from point-blank range after the restart, but PSG got their equaliser with 20 minutes to go, as Mbappe left the penalty duties to his Brazilian teammate. PSG then had chances to win all three points, with Achraf Hakimi’s fierce shot hitting the post in the 74th minute, before Nuebel denied Mbappe late on.

Marseille’s Arsenal connection: Sanchez netted a first-half brace as Marseille eased to victory in Nice to maintain their unbeaten start to the season. The Chilean former Arsenal star, who signed a one-year contract after leaving Inter Milan, opened the scoring in the 10th minute, firing into the roof of the net past goalkeeper Kasper Schmeichel. On-loan Arsenal wing-back Nuno Tavares made it 2-0 in the 37th minute, his low strike from outside the area beating Schmeichel at the goalkeeper’s near post. It was his third goal in four games since arriving on loan from the Gunners, and Sanchez then followed in to make it 3-0 before the interval after a Tavares shot had been parried.

Ivory Coast international Nicolas Pepe failed to make an impact for Nice on his debut after also signing on loan from Arsenal. Elsewhere, Junya Ito became just the third Japanese player ever to score a Ligue 1 goal as Reims drew 1-1 with Lyon. Signed from Belgian club Genk last month, Ito headed Reims in front in the first half to follow in the footsteps of compatriots Daisuke Matsui and Hiroki Sakai in scoring in Ligue 1. Reims had Dion Lopy sent off in the second half and could not hold on as Moussa Dembele equalised late on. Meanwhile, Montpellier recorded their biggest ever top-flight away win, hammering Brest 7-0 in Brittany. Elye Wahi and Valere Germain both scored twice, while Pierre Lees-Melou was sent off for Brest, whose coach Michel Der Zakarian was formerly in charge of Montpellier. There were also wins for Nantes, Lorient and Troyes. Lens beat Rennes 2-1 on Saturday.