‘Beast’ — are you on Team Lion or Team Idris? 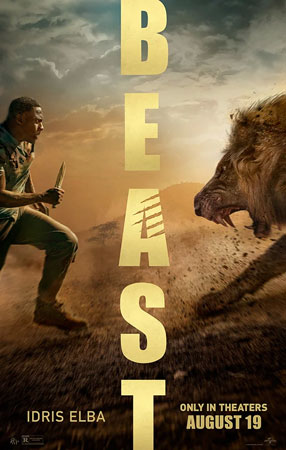 There’s a reason why most rogue animal attack movies tend to dress their peril in scales and fins. Faced with the sawblade jaws of a crocodile or a dead-eyed shark (Jaws, The Meg), we instinctively side with the humans. But throw fur into the mix and an element of empathy for the beast creeps in. The rabid St Bernard in Cujo is both victim and threat. And the male lion that terrorises Nate and his teenage daughters during their South African safari trip in Baltasar Kormákur’s highly enjoyable elevated B-movie Beast is crazed after the slaughter of his pride by poachers. It’s hard not to find yourself temporarily on Team Lion. And it’s partly this hint of emotional complexity, plus Elba’s robust redemption arc, from failed father to lion-punching saviour, that sets this picture a notch above the average creature attack flick. But mostly, it’s the fact that Kormákur makes some genuinely interesting choices. Rather than relying on staccato editing to build tension, he opts for long, fluid single shots. The camera traces looping python coils; the audience discovers the lion’s devastation at the same time as the characters. We are on the ground, in the middle of the action – a sweatily uncomfortable place to be, even before the supporting cast gets mauled.