Alia Bhatt mesmerises audiences with her voice as she sings ‘Kesariya’ 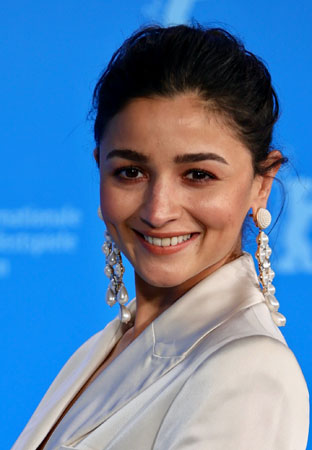 Alia Bhatt and Ranbir Kapoor have kick-started Brahmastra promotions. The film is all set to release in two weeks. The duo along with their team headed to IIT Bombay for the same. What came as a surprise, was Alia Bhatt crooning the romantic song ‘Kesariya’ from her film at the event.

A video of the actress singing the song has gone viral on the internet. In the video, Alia can be seen singing, while her hubby Ranbir Kapoor who sat next to her, cheered for her. Alia, who’s also pregnant with her first baby looked pretty in a comfy brown tee shirt which she teamed with bell-bottom jeans.

Earlier, the actress also shared a bundle of pictures flaunting her outfit, as she dished out another major maternity fashion goals. She also penned a quirky caption which read, “IIT Bombay .. here we come!!! thanks to promotions at least I can proudly say I got into IIT 9th September – BRAHM?STRA

Earlier in an interview the actress was asked how’s juggling between her work commitments amid pregnancy. She shared, “Work gives me peace, acting is my passion. If you’re fit and healthy, you don’t need to rest during pregnancy. It keeps my heart, my soul everything alive and charged.”

Speaking of Brahmashtra, the modern mythological film has been helmed by Ayan Mukerji. The movie also stars Alia Bhatt who plays the character of Isha and well as Ranbir’s love interest in the film. Ranbir and Alia fell in love while shooting for the film. The couple tied the sacred knot on April, this year.