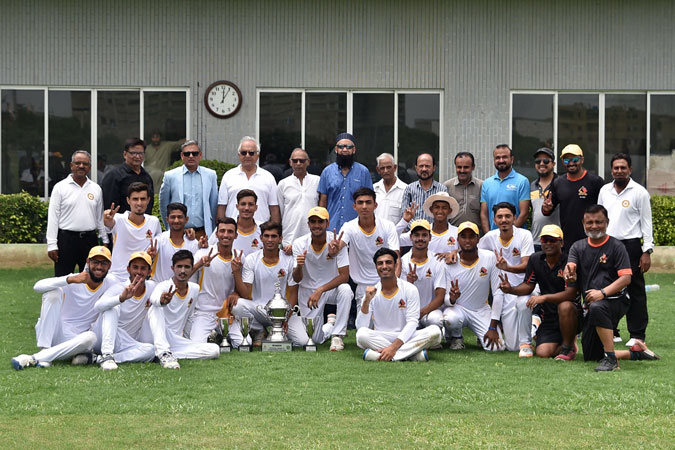 KARACHI: Sindh Blues won the National Under-19 Championship after they thrashed Sindh Whites by a mammoth 288 runs in the final played at the UBL Sports Complex Karachi here on Sunday. They now have the bragging rights of being the red-ball U-19 champions for the 2022-23 season and have also pocketed PKR1.5million. Blues completed the win on the fourth and final day of the match as they dismissed Whites’ last five batters in just 53 runs. Whites were bowled out the latter for mere 217 in their pursuit of 506. Shahwaiz Yasir, who was unbeaten on 50, could add only one run to his score, before Naveed Ahmed Khan sent him back to the pavilion. Naveed was one of the two bowlers — the other being Afnan Khan — in the innings to pick three wickets. Aftab Ibrahim and Ziaullah dismissed two batters each.

Syed Tayyab Hussain, not out on 22 when the play resumed on Sunday, was the only Whites player to show resistance with a half-century before he was stumped off Ziaullah. Tayyab hit five fours in his 151-ball 53. That Blues were able to set such a huge total for Whites was because of brilliant bowling performances from their bowlers and captain Wahaj Riaz’s sound batsmanship. Wahaj made 72 and 116 in the match and his second innings century rescued Blues from a batting collapse. Wahaj was declared player of the final. His teammate Afnan Khan, with 228 runs and 22 wickets, was named player of the tournament, while the award was best batter also went to Blues as Habibullah, the centurion in the final of the first innings, was awarded the trophy for scoring 448 runs. Sindh Whites’ Haseeb-Ur-Rehman (38 wickets) and Ghulam Ashraf bagged best bowler and best wicketkeeper trophy.