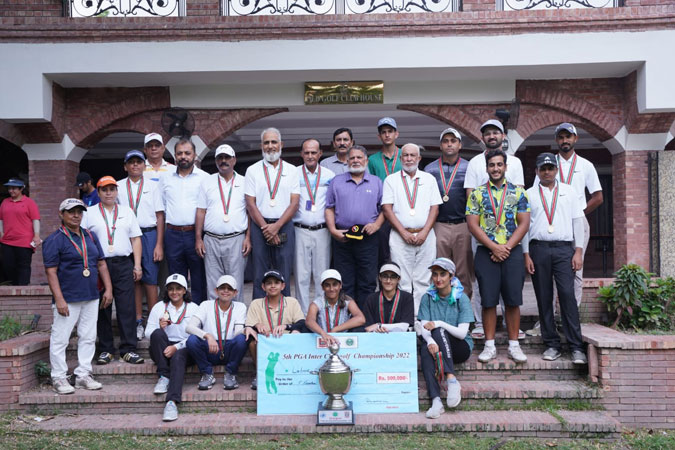 LAHORE: The PGA Inter Club Golf Championship of Punjab 2022, organised by the Punjab Golf Association, concluded at the Lahore Gymkhana Golf Course after two days of rivalry loaded golfing clash involving twenty-member teams of Lahore Gymkhana, Defence Raya Club, Lahore Garrison Greens Club and Rawalpindi Club here on Sunday. As per the competition format, each club team comprised of four amateur golfers, four senior amateurs, three women, three girls below 21 years of age, three boys falling in age bracket of 15-18 years and three boys aged 15 years and below. This team mix represented an unusual combination and clubs had to initiate and set in motion a selection process that paved the way for bringing to the fore players of merit especially in the categories of junior girls and junior boys. Pain-staking effort on the part of the golf clubs brought forth talented little ones who are likely to emerge as champions of future.

Flow of competitive play in the two rounds of this championship was aligned by the Lahore Garrison team players in a way that they appeared as the dominant ones in this encounter of glory and achievement. Their combination of four amateurs: four senior amateurs and three women played marvelously well and completely out golfed their opponents. Aggregate wise Lahore Garrison amateurs Damil Ataullah, Ahmed Sultan Kayani, Nouman Ilyas and Zainurrehman managed a team score of 461which was similar to the score achieved by Gymkhana amateurs while Defence Raya had a score of 485 and Rawalpindi had 504. As for the contribution by senior amateurs, Ikram, Tariq Mehmood, Muhammad Shafi and Raja Asif Mehdi of Lahore Garrison, their aggregate score was 488 while Rawalpindi seniors aggregated 493, Gymkhana seniors aggregated 518 and Raya compiled 541.