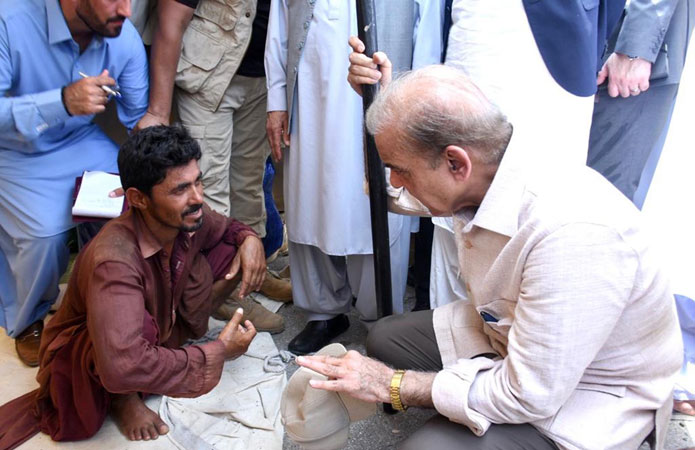 Prime Minister Muhammad Shehbaz Sharif Sunday announced a grant of Rs10 billion for Balochistan to effectively handle the flood situation and assist the victims. Speaking to the media after visiting the flood-affected areas in Jaffarabad, including Haji Allah Dino village, the prime minister said he had never witnessed in his lifetime such massive destruction wrecked by unprecedented floods and rainfalls across the country. He said the impacts of natural calamities could not be overcome with mere raising of slogans, making of statements and hurling of allegations. He stressed that they would have to work hard, and shed sweat and blood to overcome the flood situation in the country, adding that different countries had devised technical mechanisms by making investments to overcome the natural catastrophes. The prime minister regretted that false statements by certain political figures could not mislead the nation. “I will speak the truth. For the last 73 years, Pakistan could not stand on its feet,” he regretted.

The prime minister also expressed gratitude to the presidents of the United Arab Emirates and Turkey for expressing their grief over the loss of lives in Pakistan and their concerns over the distressed Pakistanis who were facing ordeals due to floods. He said they were thankful to the friendly countries who were extending flood relief and assistance to the flood victims, adding two planeloads of relief assistance from Turkey would land in Karachi while another from the UAE would arrive Islamabad. “We are grateful to the friendly countries for their support and solidarity. The UK government and other countries have announced their support in this hour of distress for which we express our thankfulness,” he added. The prime minister also appealed to the wealthy people of the country to support the millions affected people with their generous donations who had been in dire need of immediate relief and assistance.

He said in the past, the people had supported the calamity hit populace, adding that they were receiving donations in the PM Relief Fund, and cited a donation of worth Rs45 million by a group while another significant contribution by an individual. Acting Governor Balochistan Mir Jan Muhammad Jamali, Chief Minister Abdul Quddus Bizenjo and Chief Secretary Abdul Aziz Aqeeli, NDMA and PDMA authorities were also accompanied the prime minister. The prime minister said during his aerial view, he had witnessed huge chunks of land inundated by the flood water including Kachi, and Sobatpur, and likened the situation to an overflowing ocean. Flood water had submerged Rajanpur, Rahimyar Khan and Ghotki areas. He said during 2010, Pakistan faced a huge deluge, but it was restricted to Sindh River, but the recent devastation had been widespread, Sindh and Balochistan provinces were badly battered.

In Khyber Pakhtunkhwa, the heavy downpours had led to swollen rivers and water channels in Swat and Kalam, sweeping away hotels and homes within the winks of eyes, he said, adding hundreds of people lost their lives, crops were damaged while the stagnant water would create problems. “In my political and personal life, I had never witnessed such widespread destruction caused by floods, as scores of villages were effaced, hundreds of lives were lost and millions of homes swept away,” he expressed his grief. The prime minister said the federal government was providing Rs25,000 to each flood affected family out of allocated grant of Rs38 billion through the National Disaster Management Authority (NDMA) and the Benazir Income Support Programme (BISP), so that the deserving were not deprived of the assistance package.

In Sindh, he said, he had already announced a grant of Rs15 billion. The provincial chief ministers and their teams in assistance with the relevant departments had been making untiring efforts day and night, the prime minister said. The prime minister also appreciated Balochistan chief minister and his team for the rescue and relief activities as the camps for the victims were set up and their needs had been catered to. He stressed upon making safe drinking water arrangements and informed that he had already directed the federal minister of energy to supervise restoration of suspended power supply in the affected areas. The prime minister said about 50,000 stranded people, trapped in floods, had been rescued through the assistance provided by the Pakistan army and Navy helicopters.

He further informed that on Monday (today), they would be holding a meeting in Islamabad to review the situation and take further decisions. Earlier, the prime minister was given a detailed briefing by Balochistan chief secretary who apprised that 20 districts in the provinces were badly affected including Killa Saifullah and Killa Abdullah and about 1.3 million population braced the wort situation. He said a total of 65,000 houses were completed destroyed whereas Quetta-Sukkkur road link had been cut off due to collapse of bridges. A total of 25 small dams in the province were breached and 78 others had developed cracks. A total of 450 solar tube wells were damaged while millions of acres of agriculture land had been affected. Cash assistance through BISP was generated besides, arrangements were made to provide food stuff to more than 1 million people, it was added. The prime minister also met and interacted with the flood victims.