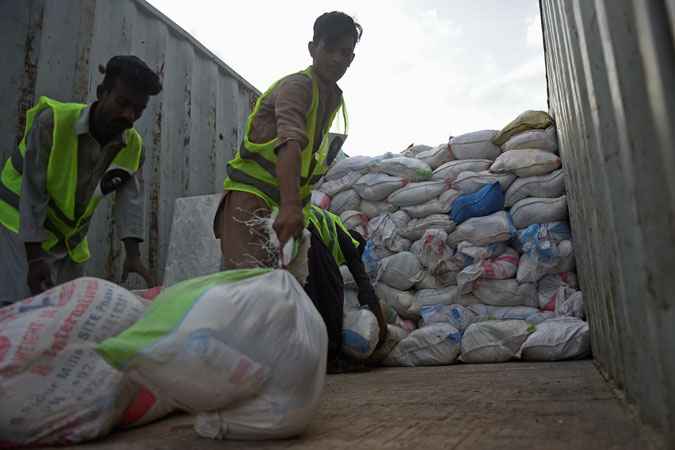 As Pakistan faces massive devastation caused by the unprecedented rains and the resultant floods across its length and breadth, many world leaders have sent messages of support and dispatched plains loaded with food and other necessary items. The first flight from United Arab Emirates (UAE) carrying over 3,000 tons of relief goods – including tents, food, medicines and other items of basic needs – Sunday landed at the PAF Base Nur Khan. UAE Ambassador in Pakistan Hamad Obaid Ibrahim Al-Zaabi handed the relief goods over to Minister for Planning Development and Reforms Professor Ahsan Iqbal. Meanwhile, talking to the media, Minister for Planning and Development Ahsan Iqbal said the international community had expressed solidarity with Prime Minster Shehbaz Sharif and assured him of their full support for the relief and rehabilitation of the people. He said many other countries, including Europe, were sending relief goods to Pakistan in order to strengthen government’s efforts of rescue, relief and rehabilitation.

He said a consignment carrying tents from China will also reach soon. The country was facing swear challenges due to devastating flash floods, he said adding that government in collaboration with international organizations and people would soon overcome this natural calamity and will use all resources for the rehabilitation of the people. The minister reaffirmed the government’s commitment to make all efforts for the rehabilitation and reconstruction of all houses and other basic infrastructure damaged due to floods and said efforts would continue till the rebuilding of the last house and enabling last affected people to stand its own feet. Ahsan Iqbal said Sindh and Balochistan were badly affected due to recent torrential rains and flash floods, causing massive devastation. He said the floods also devastated the agriculture sector as it destroyed standing crops of cotton, sugarcane and maize on millions of hectares. He said cotton, which was the major cash crop of the country was badly effected in Sindh and Punjab provinces, adding that in Punjab the areas, including Rajanpur, Dara Ghazi Khan and other areas, were badly affected.

Meanwhile, Minister for Information and Broadcasting Marriyum Aurangzeb Sunday said 15 more planeloads of relief goods from the United Arab Emirates (UAE) would arrive in Pakistan in the coming days. Meanwhile, Azerbaijan’s Permanent Representative to the Economic Cooperation Organization (ECO) and Ambassador to Iran Ali Alizada Sunday said that under the instruction of President of Azerbaijan Ilham Aliyev, his country would provide $2 million in relief assistance to Pakistan to cope with the situation in the aftermath of recent massive floods. Ali Alizada, who also served as Azerbaijan’s ambassador to Pakistan, posted on his Twitter handle. “By the instructions of the President, Azerbaijan will provide to Pakistan 2 million USD aid to assist in elimination of the consequences of large scale floods,” he posted. Taking to his official Twitter handle, Canadian Prime Minister Justin Trudeau said Pakistanis were in his thoughts as he announced support through the United Nations Central Emergency Response Fund (UNCERF) and Red Cross Canada.

French President Emmanuel Macron also sent a solidarity message saying that the country “stands ready to help”. Meanwhile, the European Union (EU) continues to support relief efforts across the country and has also announced the release of 1.8 million euros to Pakistan’s aid. Previously, the EU had announced that it will give €350,000 to provide crucial humanitarian assistance to families affected by severe flooding, particularly in Balochistan, Taheeni Thammannagoda, who oversees EU humanitarian programmes in Pakistan. Meanwhile, Foreign Minister Bilawal Bhutto had called off his official visits to the European capitals in the wake of the worsening flood situation in parts of Sindh. Extending its support, the United Kingdom government has also assured its assistance to Pakistan.

On Saturday, the Secretary General of the Organization of the Islamic Conference (OIC) also shared a message of support. Moreover, the Turkish president also sent his thoughts and prayers to the flood victims adding that “Turkiye stood ready, as always, to provide all kinds of support to the brotherly Pakistan people during this difficult time”. After a telephonic conversation with the Iranian President, Prime Minister Shehbaz Sharif also thanked him for his “message of support and solidarity” to Pakistan. Earlier, United States Secretary of State Anthony Blinken had also said that the US “stood by Pakistan in hard times” as it offered its support to the victims.